Latin American countries have imposed taxes on digital companies, closing gaps in competitiveness, according to a report by ECLAC.

In general, business models in the digital economy pose challenges for tax systems.

The fact that companies are not physically present and that the services they offer transcend geographical limits creates a difficult situation to measure with traditional instruments. 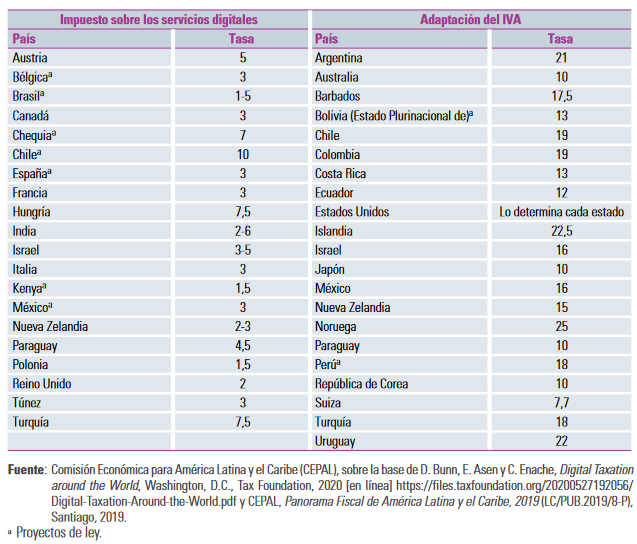 The high complexity of transactions and the difficulties in categorizing the type of economic activity and associated income are some of the challenges that arise.

In this context, the application of the traditional technical foundations on which the value added tax (VAT) and income tax are based have been fragile and a consensus has not yet been reached on the need for a new tax framework international.

On July 1, 130 countries and jurisdictions reached an agreement to continue with the development of the project with which the Organization for Economic Cooperation and Development (OECD) aims to mitigate the challenges in terms of international taxation represented by a highly digitized economy.

This project is based on two main pillars that aim to reform the international tax system to ensure that Multinational Groups (GM) are subject to taxes in the territories where they generate their profits and not only in those in which they have a physical or legal presence; In this way, it would be providing greater certainty and stability to the tax systems so that, in turn, governments can raise resources to be able to face public service programs, infrastructure and continue with the economic recovery of the post-Covid-19 era.

Then, on July 9-10, 2021, the G20 Finance Ministers and Central Bank Governors (FMCBG) met in Venice for their third official meeting under the Italian G20 presidency. This was Finance Track’s first face-to-face meeting since February 2020.

This system is based on two pillars, the way of assigning a percentage of the profits of companies, particularly digital ones, to certain jurisdictions so that they pay taxes where they operate even though they do not have a physical presence; and in the application of a minimum corporate tax rate of at least 15% to companies with a turnover of less than 750 million euros.

According to ECLAC, the peculiarities of digital companies have resulted in a disparity in the payment of taxes and have generated a problem of competition between digital companies that sell their services in one country and pay taxes in another, and local companies, which They are subject to national tax regulations and are obliged to pay all the taxes established by said regulations.

The tax advantage that these digital companies enjoy creates a distortion that is not aligned with a neutral tax policy.

In addition, the regulatory regime that provides them with tax benefits, such as incentives for research and development, and the rapid depreciation of their assets, among others, deepens tax inequalities.

While the objectives behind these benefits are to stimulate innovation and attract investment in new technologies, the lower tax burden resulting from the incentives has created a gap between the taxation of digital companies and those of other sectors.

Taxes in the region

As of January 2020, 77 countries had introduced this type of tax, of which 12 were from Latin America and the Caribbean.

Regarding direct taxes on digital services, despite the risk of double taxation, several countries have adopted interim unilateral fiscal measures, while comprehensive multilateral solutions are agreed.

China argues that digital companies should pay for data, just as the traditional industry does for the raw material it uses (SCMP, 2020).

The European Union, the United Nations and the OECD have proposed applying a 3% tax on income from activities in which the user plays an important role in creating value and where it is difficult to apply traditional taxes.

These are, for example, the online sale of advertising space, digital intermediation and the sales of data generated from the information provided by the user.

In Latin America and the Caribbean, according to ECLAC, a different approach has been made from that observed in many countries in the world.

Instead of creating a new tax, which may be provisional, several countries in the region, such as Argentina, Barbados, Chile, Colombia, Costa Rica, Ecuador, Mexico, Paraguay and Uruguay decided to adapt the VAT to the context of digital companies. On the other hand, Peru and Uruguay decided to implement a tax on the income of these companies, of 30% and 12%, respectively.