ECLAC published the 20 largest cross-border mergers and acquisitions carried out in Latin America and the Caribbean during 2020.

As in 2019, the largest investments in 2020 were in the energy sector, both in electricity and hydrocarbons.

The construction and concession of infrastructure and logistics, agrochemicals and the pharmaceutical industry also aroused the interest of transnational companies from outside the region. 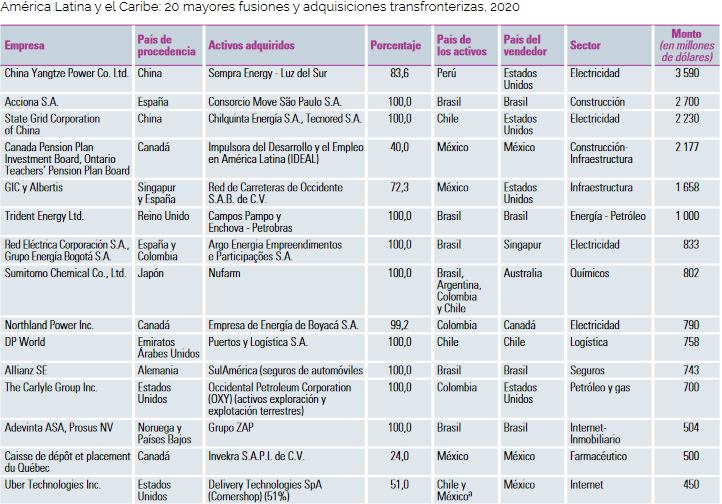 ECLAC is one of the five regional commissions of the United Nations and its headquarters are in Santiago de Chile. It was founded to contribute to the economic development of Latin America, coordinate actions aimed at its promotion and strengthen the economic relations of the countries with each other and with the other nations of the world.

Later its work was extended to the Caribbean countries and the objective of promoting social development was incorporated.

According to a report by ECLAC, in 2020 three large agreements related to the digital economy were closed, and they are not only for data centers as happened in previous years.

At the same time, electricity companies continue to attract the interest of Chinese capital, which in the last three years has positioned itself with great force in the electricity markets of Brazil, Chile and Peru, mainly through the acquisition of assets of companies from the United States.

For example, in 2020, US-based Sempra Energy sold its assets in Chile and Peru to Chinese state-owned companies.

Meanwhile, in Chile, State Grid Corporation of China acquired Chilquinta Energía S.A. for 2,230 million dollars, a transaction through which it will also control the company Tecnored S.A., which provides construction and infrastructure services, and 50% of Eletrans S.A., which is dedicated to the transmission of electric power.

The sale of Petrobras assets continued to generate some of the largest operations in the region. Another significant operation was registered in Argentina with the purchase of 49% of the Bandurria Sur land block of the Vaca Muerta deposit by European companies Royal Dutch Shell plc and Equinor.

Primary sector and mergers and acquisitions

The expansion of the agricultural industry, a sector that managed to sustain production during the crisis caused by the pandemic (ECLAC, 2021), continues to attract the interest of agrochemical suppliers. In 2020, Japan’s Sumitomo Chemical Co. Ltd. acquired the Australian group Nufarm’s subsidiaries in Argentina, Brazil, Chile and Colombia for $ 802 million. The objective is to expand the global presence and build its own development and marketing network in the region, with a strong interest in the Brazilian soybean market.