Latam Airlines reported that its indicator of Passengers per Kilometer Transported (RPK) registered a year-on-year decrease of 70.6% from January to November 2020.

The RPK is the number of passengers carried multiplied by the distance traveled.

ASK refers to the number of seats available for sale multiplied by the distance traveled.

Finally, Latam indicated that its Passenger Occupancy Factor (percentage of seats occupied) decreased 6.8 percentage points as of November 2020, also at an annual rate. This data is obtained by dividing the RPKs by the ASKs.

The company is the leading airline group in Latin America, with a presence in five domestic markets in South America: Brazil, Chile, Colombia, Ecuador and Peru, along with international operations within Latin America and Europe, the United States and the Caribbean.

Latam is the only airline group in the Americas and one of three in the world that joins the Dow Jones Sustainability Index World, where it is recognized for its sustainable practices, based on three criteria: economic, social and environmental.

The company’s passenger operation in November was 33.4% (measured in available seat kilometers -ASK) compared to the same month of the previous year, showing a gradual recovery during the last months.

In September and October of this year, the operation was 20.0 and 28.8% respectively compared to the same period of 2019. 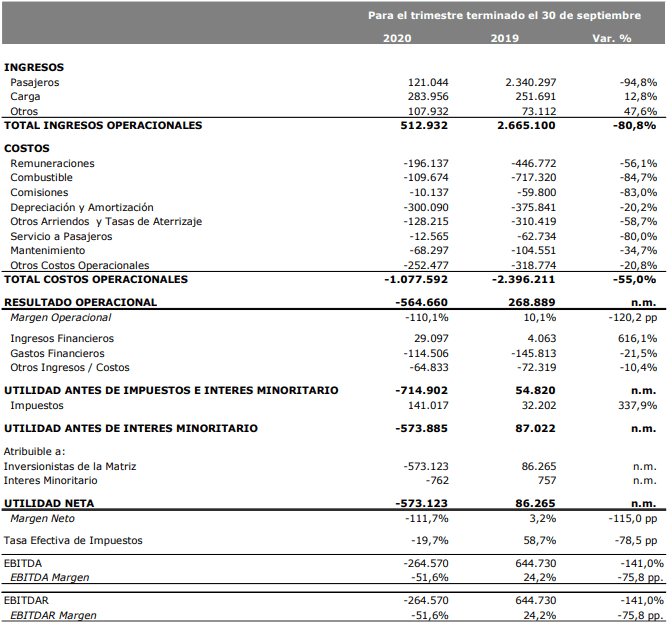 The greater capacity evidenced during November is mainly explained by the domestic operation in Brazil and Colombia and by the greater international operation due to the reopening of regional markets (in South America).