José Guillermo Zozaya Délano was elected as the new executive president of the Mexican Association of the Automotive Industry (AMIA).

This association integrates 21 companies, in one of the most dynamic sectors in Mexico, in which Mitsubishi Motors and Giant Motors Latin America also participate as producers of light vehicles.

According to the AMIA, José Guillermo Zozaya Délano has more than 40 years of experience in public, legal and international affairs, as well as in mergers and acquisitions.

“(This) gives him an unbeatable cover letter to lead the AMIA on the right track, in a context in which the automotive industry has been slowed by the Covid-19 epidemic and the challenges that the entry into force of the new USMCA (Treaty between Mexico, the United States and Canada) ”, said the AMIA in a statement.

From January to July 2020, the automotive companies installed in Mexico produced 1 million 467,644 light vehicles, a year-on-year decrease of 35.5%, according to Inegi data.

In particular, Mercedes Benz production is associated through Nissan-Daimler, Hyundai produces through its partner Kia, and BMW recently built a plant in San Luis Potosí. 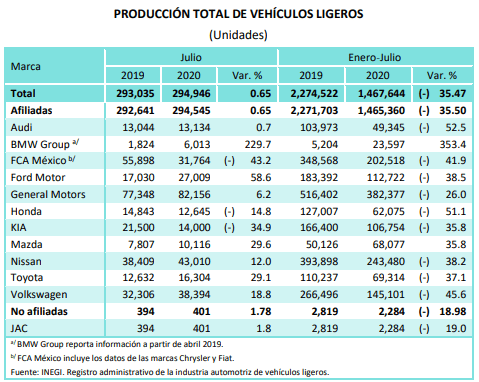 “I am very excited about this new challenge as Executive President of the AMIA, especially in the important context in which our country finds itself, facing the Covid-19 epidemic and the entry into force of the T-MEC, one of the agreements largest economic sectors in the world. I am sure that the automotive sector is one of the main engines for the social well-being of Mexico and that we will continue to promote that it continues to be that way, ”said José Guillermo Zozaya Délano.