For the first time in 20 years, iron ore trade fell 1.5% year-on-year in 2019 due to severe supply disruptions caused by the collapse of the Vale dam in Brazil and Cyclone Veronica in Australia, the United Nations Conference on Trade and Development (UNCTAD) reported in its Maritime Transport Review 2020.

Other factors at play include a change in the composition of Chinese steel production, which favors steel scrap over imported iron ore.

Given that China accounted for 72% of global iron ore imports by sea in 2019, changes affecting its import demand could have a strong impact on global trade in dry bulk commodities.

However, increasing Chinese investments in Guinea are likely to make this country an important alternative source of supply that can capture part of the Chinese market.

Although the growth of China’s economy continued to slow, its demand for steel expanded 7.8% in 2019, largely driven by real estate investment.

By contrast, the demand for steel was low in the rest of the world.

The Chinese manufacturing sector, like many other countries, came under pressure from the slowdown in the economy and the effect of trade tensions, especially in the manufacturing and automotive industries. 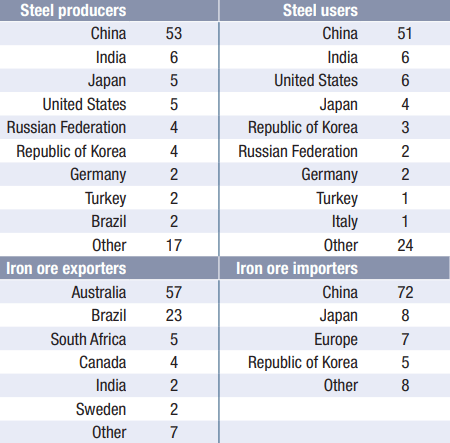