International trade recovered in the world’s major economies in the first months of the year, according to data from UNCTAD and the Reserve Bank of Australia (RBA).

The import and export trends of some of the world’s major trading economies further illustrate the recovery patterns in the first quarter.

Even considering subsequent months for some economies, it is evident that the world economic recovery is well advanced and, with it, the rebound in international trade. 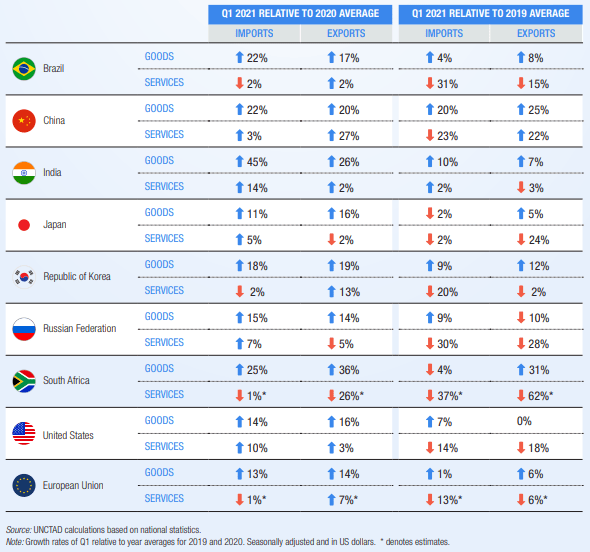 Above all, according to the RBA, the outlook for the US economy has recovered considerably after substantial additional fiscal stimulus, a drop in infection rates, and good progress in the rollout of vaccination.

On the other hand, the current strong demand for goods continues to support the recovery in China and the export-oriented economies in East Asia.

Prospects for recovery have mostly strengthened elsewhere, but ongoing activity constraints will continue to weigh on short-term activity in some economies and rising sovereign yields in advanced economies are likely to hamper the recovery of some emerging market economies.

Lately, the RBA adds, the speed and strength of the recovery have diverged between economies because vaccine launches are proceeding at different rates and control over the virus overall has varied widely.

So far, a significant percentage of the population has been vaccinated in only a few economies.

While vaccine supplies are expected to increase soon in most advanced economies, they will remain limited in many emerging market economies, hampering their recovery.

In particular, India is experiencing a significant increase in cases and the short-term outlook is highly uncertain.

For UNCTAD, with a few exceptions, trade in the major economies has recovered since the autumn of 2020.

However, the large increases were due to the low base for 2020 and international trade in many of the major economies was still below the 2019 averages.

The trend for a stronger recovery in goods relative to services is common to all major economies.

China, India and South Africa have performed relatively better in international trade than other major economies during the first quarter of 2021.

More than anything, China’s exports recorded a sharp increase not only relative to 2020 averages, but also relative to pre-pandemic levels.