The value of international merchandise trade will have a year-on-year growth rate of 28% in 2021, the United Nations Conference on Trade and Development (UNCTAD) projected.

First, preliminary data for the first half of 2021 indicate an increase in the value of merchandise trade of around 30% compared to 2020 and around 15% compared to 2019.

Likewise, UNCTAD estimates that trade will recover further during the second half of 2021.

“International merchandise trade is booming,” UNCTAD said in a report. 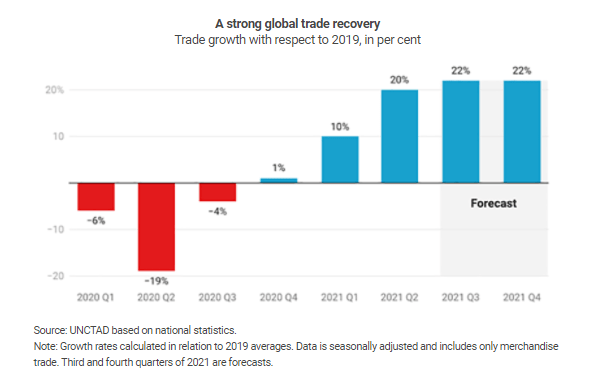 For now, many countries’ exports are growing at double-digit rates and world trade has already passed the pre-pandemic levels of 2019.

However, the recovery in world trade hides a significant asymmetry: small economies and the poorest countries are lagging behind. His recovery is not yet in sight.

In April 2020, the Covid-19 pandemic brought the world economy to a standstill.

Production and consumption declined rapidly around the world, and international trade appeared to be on the way to lasting decline.

However, UNCTAD recalled, by the summer of 2020, world merchandise trade began to recover, driven by exports of Covid-19-related products, in much of the East Asian economies.

By the end of the year, trade was recovering strongly in many countries and sectors.

World trade continued to grow in the first half of 2021, as global value chains recovered and demand increased in advanced economies.

This strong and rapid business recovery was largely unexpected.

However, a significant concern has been that differences in financial resources could result in an uneven recovery. This could further exacerbate existing inequalities.

Over time, this concern has become a reality: there is an uneven recovery in international merchandise trade. 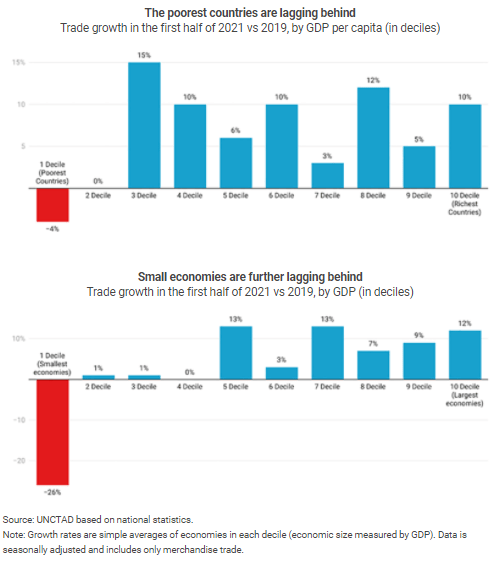 Interestingly, the differences in the recovery patterns of international trade do not manifest themselves as most would have imagined: economic size seems to have a stronger influence on the recovery of trade than income levels.

This can be illustrated simply by organizing countries into deciles according to their economic size (measured by GDP) and income level (measured by GDP per capita), and then calculating average trade growth rates by comparing exports in the first half of 2021 with the 2019 pre-pandemic levels.