Interest rates in Mexico have been affected by continued disruptions in the global supply chain, the adverse effects of the Russia–Ukraine conflict-including volatile oil and gas prices and disruption in global financial markets-and the blockade imposed on some Chinese provinces in response to the resurgence of Covid-19.

All of these factors have also dampened the recovery in domestic demand and credit, led to higher costs and inflation, and contributed to shortages of inputs for industries such as construction and manufacturing. 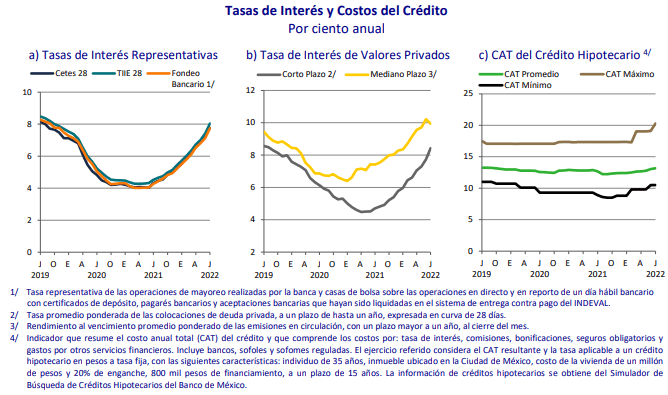 As for household credit costs, in July 2022, standard mortgage credit had an average total annual cost (CAT) of 13.17 percent.

The main objective of the government’s monetary policy is to create a low and stable inflation environment.

These objectives are achieved through actions taken by Banco de México (Banxico) to influence interest rates and inflation expectations in order to bring price behavior in line with the Government’s overall monetary policy goals.

To be taken into account: the interest rate of short-term private securities corresponds to the weighted average rate of placements in the month, for a term of up to one year, expressed in a 28-day curve. The rate for medium-term securities, with a placement term of more than one year, is an indicator that refers to the weighted average yield to maturity of outstanding issues at the end of the month.