Currency depreciations and increases in commodity prices have raised inflation in Mexico, South Africa and the Russian Federation, but at a more moderate rate than in Brazil, indicated a report from the United Nations Conference on Trade and Development (UNCTAD).

So far, in the advanced world, stronger inflationary pressures appear to be a feature of the US recovery.

In mid-2021, the United States economy posted its highest consumer inflation in ten years (5.4%), which some have taken as an indication that macroeconomic policy has been too expansionary.

In mid-2021, these three economies recorded consumer price inflation of between 4 and 6%, which, in turn, has led the Central Banks of Mexico and the Russian Federation to tighten monetary policy. 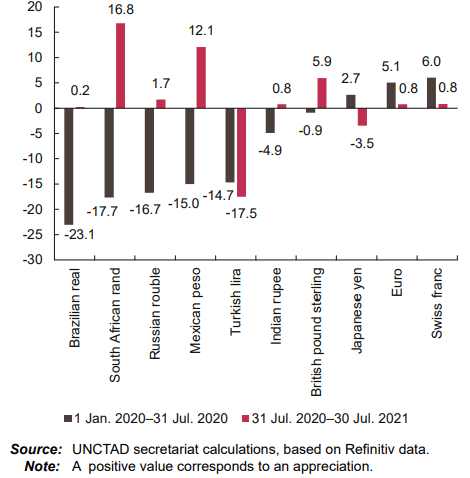 According to the results of the Banco de México Survey, private sector specialists raised their inflation expectations for Mexico to 6.60% by 2021.

In India, consumer inflation was already 6% before the pandemic. The Covid-19 shock caused a temporary drop in prices, but as the economy recovered and food prices accelerated, the country returned to a 6% inflation rate in mid-2021.

By contrast, in China, the government had been adopting restrictive measures to combat inflation prior to the Covid-19 shock.

In mid-2020, the sudden stop of the Chinese economy increased the impact of the restrictive measures and briefly pushed the economy into deflation. As the economy recovered, inflation returned to positive, although still low (around 2 percent) by international standards.

In the advanced world, Japan is still fighting a deflationary trend, which means that the recent acceleration in prices has not been enough to offset the deflationary pressures caused by the pandemic.

A more moderate version of Japanese history is unfolding in Europe, where inflation has been on the rise, but not yet enough to make up for nearly eight years of effective price stagnation with annual increases below the 2 percent target.