Indonesia has pursued a policy of increasing regional and international integration through economic-trade cooperation initiatives.

The more liberalized IP-PTA has been in place since 2019, while the protocol to amend the IJEPA was still under negotiation in April 2020.

Over the last six years, Indonesia has signed bilateral regional trade agreements with Australia, the EFTA states and Mozambique, but none had entered into force in April 2020.

Building on the ASEAN-Australia-New Zealand Free Trade Agreement, an Indonesia-Australia Comprehensive Economic Partnership Agreement (IA-CEPA) covering, among other things, trade in goods (tariffs, non-tariff measures and trade facilitation ) and services, as well as investment, was ratified by both countries in February 2020.

However, as of April 2020, there is no indication of its date of entry into force and the authorities had the planned notification to the WTO.

The broad-based EFTA-Indonesia Comprehensive Economic Partnership Agreement (CEPA) covering trade in goods, trade in services, investment, intellectual property rights, government procurement, competition, trade and sustainable development, and the cooperation was signed on December 16, 2018; in April 2020, it was expected to go into effect in the second half of 2020.

On August 27, 2019, the Preferential Trade Agreement (PTA) was signed between Indonesia and Mozambique, which covers only merchandise trade; however, as of April 2020, it had not entered into force.

Then, on November 25, 2019, a Joint Statement on the conclusion of negotiations for the Comprehensive Economic Partnership Agreement (CEPA) between Indonesia and Korea was issued, and both parties agreed to sign the Agreement in the first half of 2020.

Product composition of merchandise trade, 2012 and 2019 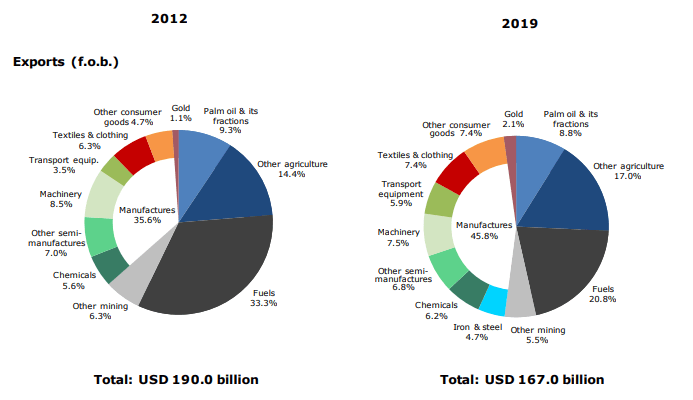 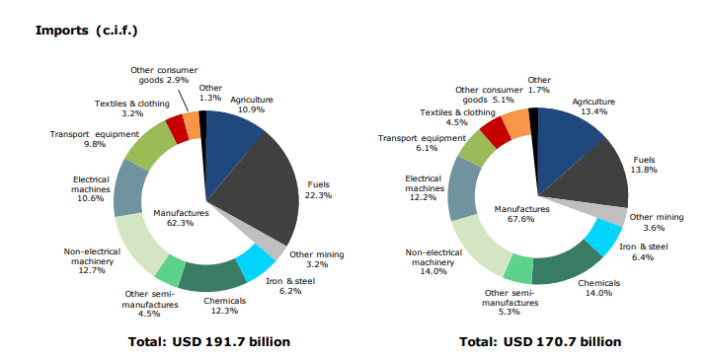 However, the UIS-CEPA and IT-CEPA meetings had to be postponed due to the Covid-19 outbreak and a new schedule had to be determined.

Additionally, in June 2020, Indonesia and Colombia agreed to initiate and complete a joint feasibility study to increase access for various export goods to both markets.