Imports and exports between India and Mexico are under-exploited, considered the Indian Ministry of Industry and Commerce.

India’s merchandise trade as a percentage of GDP accounts for about 30%.

The growth of both exports uncomfortable and Indian imports slowed considerably in 2015/2016, due to lower oil prices and weak global demand.

Since then, exports have grown by about 8% per year on average and imports have increased by almost 11%.

Regarding its trade with Mexico, according to data from the Ministry of Economy, Mexican purchases from India were 4.256 million dollars in 2020, a year-on-year decrease of 17.9 percent. Conversely, Mexican exports totaled 2,617 million dollars, a contraction of 36.9 percent.

On the one hand, Mexico imports products such as cars, auto parts, aluminum, electric motors, transmissions and diamonds from India.

Meanwhile, Mexican exports to the Indian market include telephones, computers, auto parts, chemicals, minerals, and electrical products, among others.

In May 2020, the Indian Government announced the Atmanirbhar Bharat Abhiyan (Self-Sufficient India) Program to deal with the effects of the Covid-19 pandemic.

Its objective is to stimulate various sectors and groups in society to face the repercussions of the current health crisis.

The set of measures, estimated at INR 20 trillion, combines fiscal, financial and structural reform measures, some of which are already planned, in particular legislative changes.

With statistics from the Indian government, Mexico is India’s most important trading partner in Latin America, reaching a mutual bilateral trade of approximately 8,000 million dollars in fiscal year 2019-20 (until September 2020).

“This is below the potential between two countries,” said India’s Ministry of Industry and Commerce. 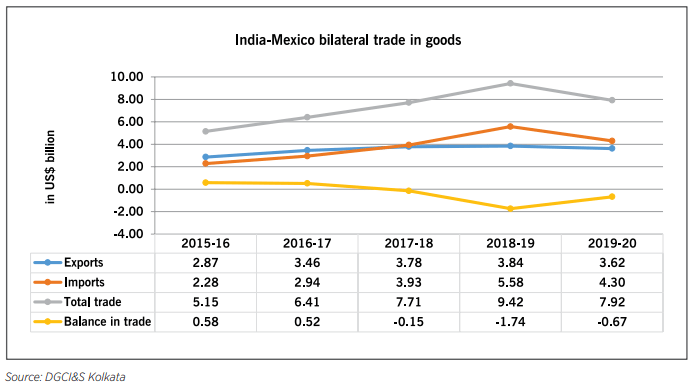 In general, there has been an upward turn in relations between the two countries after Prime Minister Narendra Modi’s visit to Mexico in June 2016, when both countries decided to elevate bilateral relations to the level of “Strategic Partnership”.

In particular, the Bilateral High Level Group (BHLG) on Trade, Investment and Economic Cooperation mainly includes the promotion of bilateral cooperation, maintaining the link in the economic, commercial, technical and other related fields and information exchange.

Most recently, the 5th BHLG meeting on trade, investment and cooperation was held virtually on October 9, 2020.

Both sides discussed a number of ongoing and pending bilateral issues, ranging from audiovisual co-production, the Bilateral Investment Treaty, market access for agricultural products, a cooperation framework on sanitary and phytosanitary measures and technical barriers to trade (OTC ) between the two countries, cooperation on intellectual property rights and exploration of ways to promote tourism between India and Mexico.

After the meeting, a joint statement was issued to reiterate their commitments to improve the business relationship.

Two business-to-business memorandums of understanding were signed to foster cooperation in the respective domains.

A memorandum of understanding between the Council for the Promotion of Exports of Electronics and Computer Software (ESC) of India and the Mexican Chamber of Electronics, Telecommunications and Information Technologies (CANIETI) and a memorandum of understanding between the Federation of Chambers of Commerce and Industria de la India (FICCI) and the Mexican Foreign Trade Council (COMCE) to promote the development of trade relations between India and Mexico.