Above all, the current account deficit was due to a significant reduction in the primary income deficit and the continued dynamism of remittances, which were partially offset by a lower non-oil trade surplus and an increase in the balance deficit. commercial and oil services. 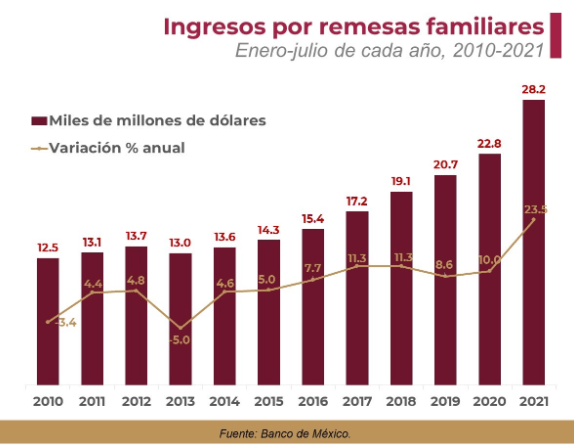 From 1988 to 2019, Mexico registered a deficit in its current account, mainly due to the liberalization of trade policies by the Government that increased imports from the private sector.

Income from remittances to Mexico, which is one of the main sources of foreign currency for the country, totaled 4,540.3 million dollars (mdd) in July 2021, which implied the highest monthly amount sent since registration (1995) and a growth of 28.6% compared to what was sent in July 2020.

For its part, during last July the number of operations for sending remittances was 11.6 million, the second highest since the report is available and (after that shown in May 2021) and 13.0% more than those registered in July 2020, with an average per transaction of $ 390, that is, $ 47 above the average amount per transaction reported twelve months earlier.

In the accumulated, remittances sent to our country totaled 28,187.3 million dollars in the first seven months of this year, the highest amount reported for a similar period since it has been registered and 23.5% higher than that sent in the same period of 2020.