Of the total imports of televisions to Colombia, Mexico managed to supply 75% in 2021, according to information from the Ministry of Economy.

Globally, Mexico was positioned as the second largest supplier of this product in 2021, after China.

The main markets for televisions produced in Mexico in that same year were the United States, with a share of 88%, followed by Canada (3%) and Colombia (2%).

Among the largest foreign suppliers of televisions in Colombia, after Mexico, was China, with a 21% share, and Indonesia with a 1% share. 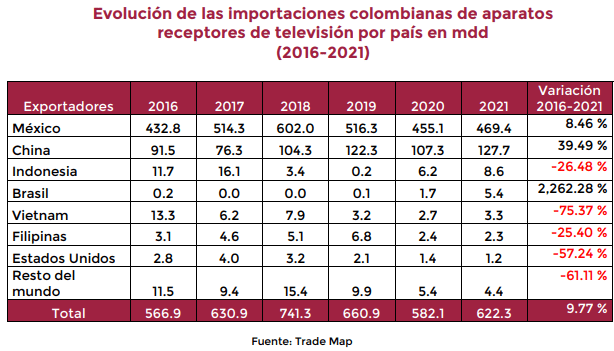 The development of Mexican exports of this product to Colombia presented an average annual growth of 18% between 2016 and 2018.

It is from 2019 where Mexican participation begins to show a decrease, consolidating in 2020 a drop of 13% compared to the previous year.

For its part, China, despite having a smaller share than Mexico in the Colombian market, in recent years has recorded an increase in its exports of televisions to that destination.

It is presented that in 2016 China exported US$92 million and maintained its growing exports at an average of 18% per year until 2019.

In terms of tariffs, Colombia offers tariff preferences in the trade of televisions to Mexico, Brazil and the United States. China, Indonesia and other Asian suppliers pay a 10.1% tariff.

Another important aspect to take into account, according to the Ministry of Economy, is the geographical proximity and logistical costs involved for Colombian importers in obtaining supplies from different origins.

In this case, Mexico has an advantage over its competitors, including Brazil and the United States, which enjoy the same tariff preferences as Mexico.

For the Mexican government, the diversification of Mexico’s exports will reduce the risks of externalities, and the case of televisions is no exception, considering the positioning already acquired in Colombia.

Conclusions Mexico and Colombia are important regional trading partners. The existence of the Economic Complementation Agreement No. 33 and the Pacific Alliance initiative encourages them to continue deepening their business relationship.

Brazil is Colombia’s fourth largest supplier of television receivers and, like Mexico, has a tariff preference for this product.