The IMF has proposed a plan, jointly supported by the World Health Organization (WHO), the World Bank and the World Trade Organization (WTO), to vaccinate against Covid-19 at least 40% of the population in all countries. countries by the end of 2021 and 70% by mid-2022, in addition to ensuring adequate diagnosis and treatment.

The 70% coverage target by mid-2022 is driven by the health and economic imperatives to stop the pandemic as quickly as possible.

This is higher than the 60% target originally proposed for mid-2022 given the increase in more infectious variants.

The revised target is consistent with the downside risk scenario envisaged in the IMF staff’s original proposal of $ 50 billion published in May 2021, under which an additional 1 billion doses were designated for low-income countries and lower medium, and is aligned with the update of the WHO global vaccination strategy. 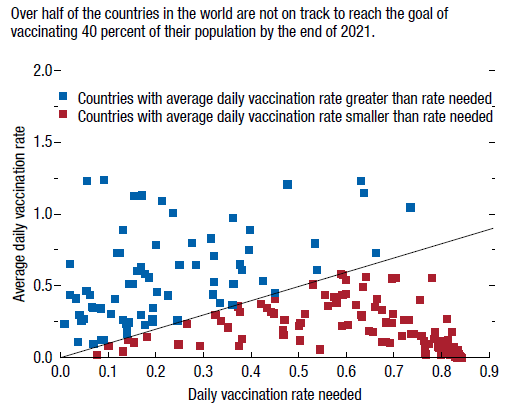 According to the IMF, national targets may need to be adjusted based on age demographics and policy developments.

With an estimated cost of around $ 50 billion, the plan has the potential to generate massive social and economic benefits.

There is an urgent need for vaccine donations from countries with a large part of their population already vaccinated.

The IMF proposal estimates that at least 1 billion doses could be shared by the end of 2021 without jeopardizing national vaccination targets.

Recent pledges from China, the Group of Seven and other countries in that direction are welcome steps, although donations must be accelerated to quickly meet commitments (as of mid-September, only about 19% of the 850 million doses pledged by the Group of Seven has surrendered to COVAX in June).

It is also critical to prioritize vaccine deliveries to countries that still lack broad access, including improving supply to mass procurement vehicles such as COVAX.

Diversification and expansion of vaccine production and distribution capacities (including through investments at risk in doses on behalf of low-income developing countries) are important to accelerate the broad coverage of the world population.

Such actions would improve readiness to react and adapt to unexpected twists in the pandemic, including the possible need for booster injections if immunity declines or new variants emerge.

Any action that helps contain and mitigate the health effects of SARS-CoV-2 increases further in importance as the likelihood of the virus becoming endemic increases with the persistence of the pandemic.