The IMEF Manufacturing Indicator of Mexico increased 1.0 points in March to reach 50.7 units, with which it moved to the expansion zone (> 50) after spending 21 consecutive months in the contraction zone (<50).

Its trend-cycle series increased 0.1 points to reach the threshold of 50.0 units after having registered 21 consecutive months in the contraction zone.

For its part, the Indicator adjusted for company size increased 1.6 points to close at 53.9 units, remaining in the expansion zone for the ninth consecutive month.

The IMEF Indicator ranges from 0 to 100 points and the level of 50 points represents the threshold between an expansion (greater than 50) and a contraction (less than 50) of economic activity.

But the indicator does not provide specific information on the magnitude of the expected changes.

“The results of the IMEF Indicator for March show signs of a reactivation of economic activity in both the manufacturing and non-manufacturing sectors,” said the IMEF.

However, the Institute added, high risks persist arising from the effectiveness of the vaccines, as well as the supply and logistics necessary to inoculate the population.

Likewise, there are very relevant challenges in terms of the heterogeneity of the economic recovery: between regions and countries at a global level and between localities and socioeconomic classes within countries.

However, the most pressing risk for participants in international financial markets is the possibility that increased economic growth will lead to substantial inflationary pressures that will cause the Federal Open Market Committee (FOMC) of the Federal Reserve Bank (Fed) to have We have to withdraw the monetary stimulus much earlier than the FOMC itself anticipates, that is, before 2023. 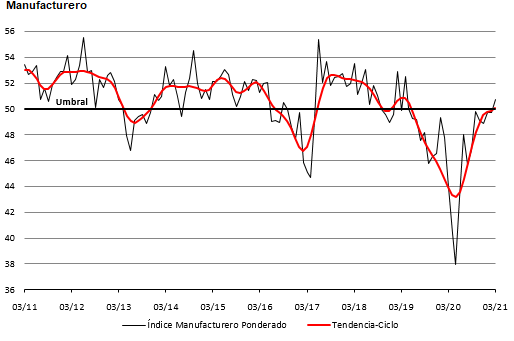 Market participants have had a hard time digesting the Fed’s new monetary policy scheme, which consists of targeting average inflation, rather than punctual, at 2 percent.

This should “reassure” market participants because it means that inflation in the United States can be above target for some time without the FOMC having to raise interest rates.

In this sense, market participants demand more than words.

This would ease the pressure on longer-term yields. Eventually the FOMC could carry out a ‘twist’ in case they consider that volatility could jeopardize the recovery of economic activity.