Illinois leads energy consumption in the Midwestern United States, according to data from the United States Energy Information Administration (EIA).

That state was also the third largest energy producer in the region.

In 2018, Illinois customers consumed 4.0 trillion British thermal units (Btu) of energy, and 2.6 trillion Btu were produced in the state.

Total energy production and consumption in Illinois each represented nearly 17% of the total Midwest.

The industrial sector led the consumption of energy in Illinois in 2018, and represented almost 30% of the total energy consumed in the state in that year.

At the same time, oil was the most consumed fuel in Illinois, accounting for almost 28% of total energy use in 2018.

Illinois is home to an extensive highway and rail network, as well as the second busiest commercial airport in the country, O’Hare International.

Natural gas accounted for 26% of the energy consumed in Illinois in 2018. Nearly 80% of Illinois residents use natural gas as their primary heating fuel, according to census data.

Illinois contains approximately 15% of the nation’s economically recoverable coal reserves, second only to Wyoming, and ranked fourth among states in coal production in 2018.

Illinois ranks second as a US producer of bituminous coal, which is used to generate electricity and produce steel.

In 2018, about 15% of the energy produced in Illinois came from renewable sources.

Illinois was the third largest ethanol producer in the country and the fourth largest biodiesel producer in 2018.

Finally, Illinois is home to several key components of the energy infrastructure, especially near Chicago and Lake Michigan. 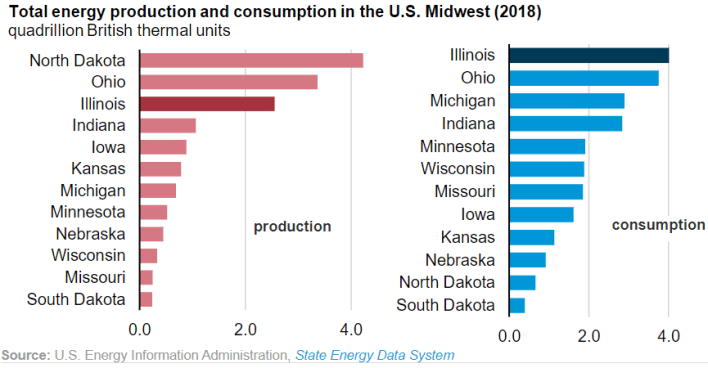 Four Illinois oil refineries have a combined refining capacity of 1 million barrels per day, the fourth highest in any state.