The Spanish company Iberdrola reported that in the first half of 2021 it increased its own solar energy production capacity in Mexico by 17.6% compared to the same period of the previous year, to 642 MW.

In photovoltaic solar technology, Iberdrola completed the installation and start-up of the Cuyoaco plant (274 MWdc) in the state of Puebla in 2020.

In Mexico, the thermal capacity of the company as of December 31, 2020 was 9,348 MW, after the entry into operation last year of the combined cycles of El Carmen (866 MW) and Topolobampo II (911 MW), the completion of the Topolobampo III combined cycle (779 MW, of which 766 MW are for third parties) and the transition from Enertek’s cogeneration to operating as a combined gas cycle, contributing 144 MW to this technology. 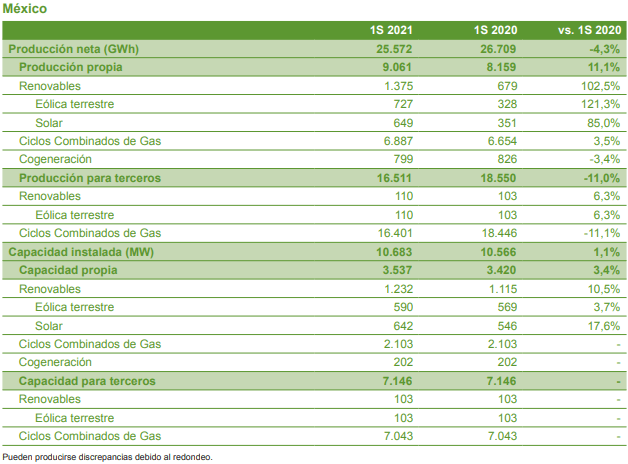 Thermal production during 2020 reached 55,641 GWh, 13% higher than that generated in the same period of the previous year.

Iberdrola and regulation in Mexico

As long as these processes are not resolved, or the constitutionality or not of the Reform is defined, it is paralyzed by the precautionary measures granted by the courts.

On June 16, 2021, the National Energy Control Center (CENACE) published a Notice regarding the Agreement to guarantee the efficiency, Quality, Reliability, Continuity and Safety of the National Electricity System, on the occasion of the recognition of the disease epidemic by the SARS-CoV2 virus (COVID-19) ”(Reliability Agreement) dated April 29, 2020 and its Technical Annex.

The Notice is intended to inform that the responsible judge declared the Reliability Agreement unsupported.

In November 2020, the Ministry of Energy (SENER) and the Energy Regulatory Commission (CRE) through various acts modified the terms, deadlines, criteria, bases and methodologies of the Legacy Contracts for Basic Supply (CLSB) in order to extend their validity, modify the terms of said contracts and incorporate new CFE generation plants as Legadas.

Then, in May 2021, the courts granted a precautionary measure with general effects, in the face of the claim for protection filed by an individual, against the modification of the CLSB, temporarily reestablishing the terms of the CLSB that were previously in force.

On May 20, 2021, SENER published a notice to the participants of the Wholesale Electricity Market by means of which it announced the suspension granted by the courts.

In 2021, CFE’s Final Basic Supply Rate has been updated monthly in accordance with the methodology to determine the calculation and adjustment of the final Basic Supply rates published by the CRE on December 17, 2020.

Derived from the precautionary measure granted by a Judge against the application of the Modification to the CLSB of 2020, the CRE modified for the month of June 2021 the method for calculating the generation and capacity charges that are part of the Final Basic Supply Rate of CFE.

The change consisted of transferring the rate applied in June 2020 to present value by applying an increase for inflation.