Retroactively, the pandemic in 2020 had the largest impact on air travel and the aviation industry since World War II.

Previously, the adverse impacts on aviation from the 9/11 terrorist attacks and the 2007-08 global financial crisis were seen as dramatic. 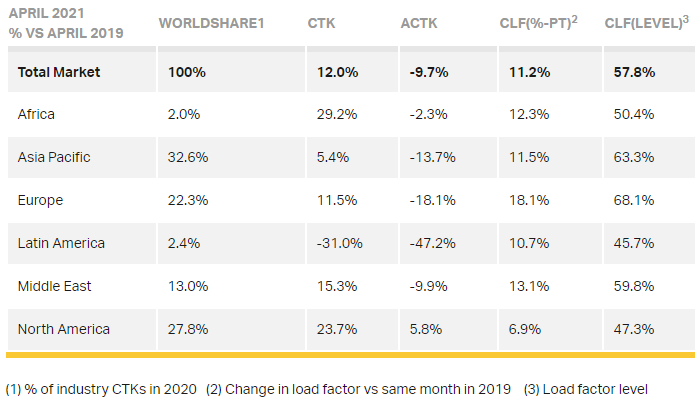 But none had an impact that compares with the 65.9% decline in global revenue per passenger-kilometers (RPK) in 2020, according to IATA.

As a result of the adverse effects of Covid-19, IATA estimates a reduction in industry revenue worldwide by $ 314 billion.

In April 2021, seasonally adjusted demand was 5% higher than the pre-crisis peak of August 2018.

In fact, the strong performance was led by North American airlines which contributed 7.5 percentage points to the 12% growth rate in April.

Also airlines from all other regions, except Latin America, supported growth.

Capacity remains 9.7% below pre-Covid-19 levels (April 2019) due to the ongoing grounding of passenger aircraft.

In general, airlines continue to use dedicated freighters to cover the lack of available cargo capacity.

The international capacity of dedicated freighters increased 26.2% in April 2021 compared to the same month of 2019, while the lower cargo capacity decreased by 38.5 percent.