A rapid shift to e-commerce has saved the OLLY’S healthy snack startup during the coronavirus pandemic after 40% of its monthly revenue disappeared due to the cancellation of airline and rail services.

The story of this company was highlighted by the UK Department for International Trade and described as follows.

Founded in her parents’ kitchen three years ago, a love of olives inspired Olly Hercocks to create the world’s first bag of unpasteurized olives.

It quickly went from selling them in Richmond’s Duck Pond Market to supplying major airlines and more than 8,000 storage locations around the world.

Due to the growing demand for nutritional snacks, Olly had just decided to expand his company’s portfolio to include nuts and pretzels when the pandemic hit.

Forced to suspend personnel to stay afloat, OLLY’S sought advice from the Department of International Trade on how to seek new export opportunities to compensate for the loss of business.

This resulted in the company turning its efforts towards e-commerce with impressive results.

Olly Hiscocks said: “With no airlines, trains or bars to supply our products to, we had a large amount of excess stock at the beginning of the closing.

“We knew we had to find a way to sell these stocks to stay afloat, so we decided to increase our online store and launch our new range of bulk nut mixes on Amazon. “The response was incredible – our monthly online sales were up 800 percent.”

Now the company is focused on the launch of OLLY’S PRETZEL Thins and continues to work with the Department of International Trade as we seek to maximize its online sales and access new markets. 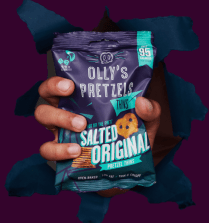 In July, OLLY’S secured a contract with a distributor from the Gulf Cooperation Council (GCC) countries and signed an agreement with Middle Eastern supermarket retailer Spinneys.

The company is currently expanding to Australia, as well as Wholefoods, in the United States.

In ongoing negotiations with Australia and the United States, the Department of International Trade aims to achieve comprehensive free trade agreements that make it easier for SMEs, such as OLLY’S, to trade in these key markets.

In June 2020, the share of retail sales made online in Britain declined slightly to 31.8%, following the record 33.3% seen in May, a considerable increase from 20.0% in February.