Houston, New York and Los Angeles led US exports in 2020, measured by value and in metropolitan statistical areas (MSAs).

Next came Chicago and Dallas, according to data from the United States Department of Commerce. 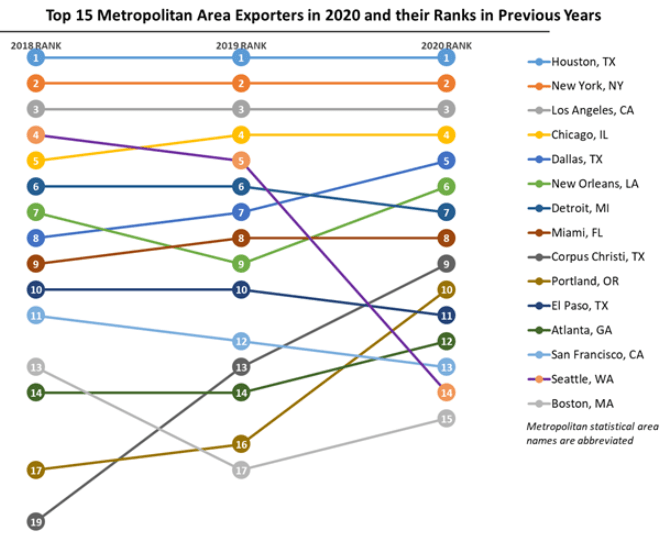 However, international trade is not just for the main centers of the United States; The top 15 MSA exporters also include smaller areas such as Corpus Christi (TX) and El Paso (TX), which benefit from their location on the US border.

While the top four exporting MSAs maintained their ranks since 2019, other top MSAs experienced changes.

For example, Seattle (WA) fell in the range of the fifth to the fourteenth largest exporter, explained in large part by a drop in exports of transportation equipment.

In contrast, New Orleans (LA), a hub of US agricultural products, climbed three places in the ranking to the sixth largest exporter.

Corpus Christi (TX) and Portland (OR) also had notable increases in range, driven by increases in oil and gas and computers and electronics, respectively.

Most Americans live in metropolitan areas, which consist of densely populated central regions and surrounding areas linked to those nuclei.

Statisticians define them as MSAs, and trade specialists study these locations because they can provide valuable information about the performance of US exports, industries, and the economy.

After all, MSAs are critical players in that country’s economy and commerce, accounting for an average of 89% of US exports over the past five years.

Despite the global economic impacts of the Covid-19 pandemic, 2020 was still a great year for the 392 US MSAs, which in total exported $ 1.3 trillion in goods.

While exports are down $ 194 billion since 2019, a deeper study of MSA data reveals pockets of resilience.

In fact, nearly a quarter of reported MSAs saw export growth, with Portland (OR) and Stockton (CA) leading the way (with increases of $ 4.1 billion and $ 2.5 billion, respectively).