The M9 hot tub manufactured by Bullfrog Spas provides an example of how one company currently combines domestic production, offshoring and vertical integration to manufacture its products.

The example was recently included in a report from the US White House.

First of all, the M9 hot tub is manufactured by Bullfrog Spas in Utah, where 500 workers assemble nearly 1,850 parts from seven countries and 14 states.

The hot tub top cover starts out as a flat acrylic sheet from Kentucky, which is then combined with a different type of plastic in Nevada and sprayed with an industrial chemical from Georgia.

Parts of the hot tub structure are trucked in from Idaho several times a week.

Sources of the Components of a Hot Tub 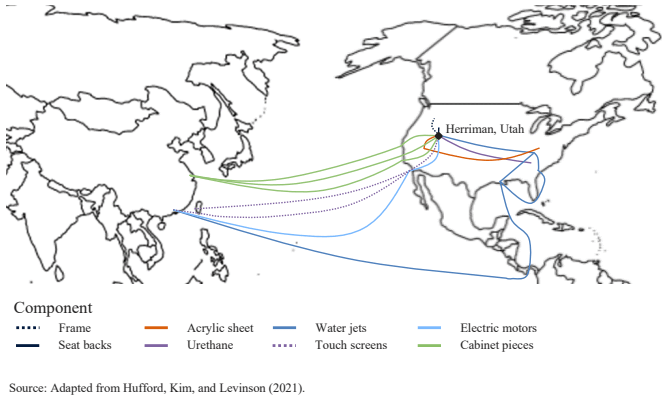 Many of the electric motors come from China and are assembled into water pumps in Mexico and then driven to Utah.

Additional material for exterior cabinetry is transported from Shanghai by container ship through the ports of Long Beach or Oakland.

Also, the water spray jets are manufactured in Guangzhou, China; shipped through the Panama Canal and Eastern ports to the supplier’s warehouse in Cleveland, Tennessee; and then they are sent to Utah.

Once fully assembled, the finished hot tubs are loaded onto trucks or trains and shipped to retail warehouses.

This example illustrates both the extent of outsourcing, which increases the number of individual firms involved in the production of a single good, and the geographic distance traveled by each component, estimated to total nearly 900,000 miles, as well as the reliance on transportation and logistics that this entails.

According to the company itself, Bullfrog Spas are the most innovative and advanced hot tubs on the market today. The patented JetPak therapy system allows to customize its spa by selecting your preferred JetPak massages, placing them in your favorite seats and moving them from one seat to another at any time.

This system uses up to 90% less plumbing than conventional spas, which means less friction and higher water pressure. Its Bullfrog Spa provides powerful therapy and can run all the jets at full power at the same time.