Honeywell highlighted that the ability to innovate is its biggest competitive differentiator and gave some examples of this, especially in the aviation industry.

In general, this American conglomerate pushes each of its companies to cultivate innovative initiatives, which are new areas of growth that can change the trajectory of the business.

Last year, the company announced the formation of a business unit dedicated to the growing UAM/UAS market and, by its own assessment, has achieved remarkable success. 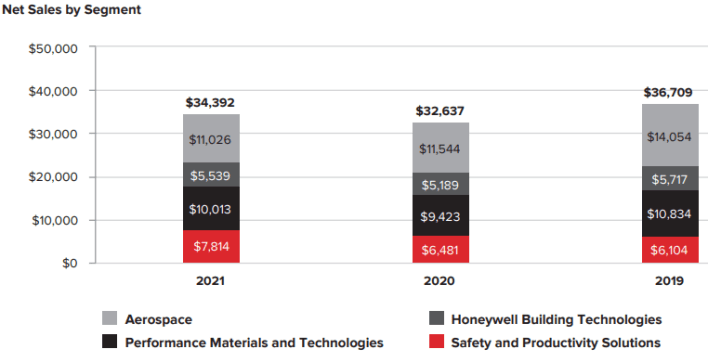 Its technologies in avionics, crash protection, actuation and electronic engines enabled the company to secure more than $3.5 billion in awarded business and have ensured that Honeywell will continue to play an important role in the future of aviation.

In 2021, the company also launched Honeywell Anthem, a revolutionary connected avionics product that, due to its modularity, can be used across all aviation platforms, including UAM/UAS, air transport, commercial aviation, and even military aviation.

In January 2022, Honeywell was selected to provide its new HTS7500 turboshaft engine as the engine behind the SikorskyBoeing DEFIANT X helicopter, which is currently a candidate to win the US Army’s Future Long-Range Assault Aircraft (FLRAA) competition.

This platform search has the potential to result in more than $25 billion over the life cycle of the program.

Additionally, Honeywell made great progress in its Sustainable Technology Solutions business. Its portfolio has virtually every technology that will be relevant to the future of energy and sustainability, including hydrogen, flow batteries, carbon capture, green fuels, and plastic recycling.

In 2021, the company made big gains in green fuels with PBF Chalmette, CVR and Euglena-Petronas, resulting in a year-over-year increase in orders of 137 percent.

When used together throughout the fuel lifecycle, Alder technologies, in conjunction with Honeywell’s Ecofining process, could have the ability to produce a carbon-negative fuel to today’s jet fuel specifications.

It also announced agreements to form a joint venture with Sacyr in Europe and a joint venture with Avangard in the United States for recycling plastics with its innovative UpCycle process technology, won the largest carbon capture project in North America in the Wabash Valley. and joined forces with Duke Energy to field test flow battery technology.