Grupo Sanborns represents 42.5% of Grupo Carso’s total revenues and its performance increased 35.0% annually due to the recovery of sales in department stores after the Covid-19 pandemic.

The other divisions of Grupo Carso also increased their sales, such as Grupo Condumex due to greater demand for cables and automotive harnesses. 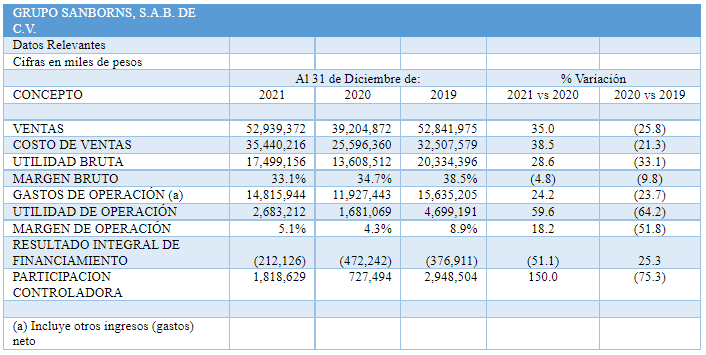 In Carso Infrastructure and Construction, sales increased 3.8% due to drilling services and the inclusion of the Mayan Train project, offsetting the completion of the construction of oil platforms.

In addition, the Carso Energy division, which represents 2.4% of the conglomerate’s total income, grew 228.4% due to the start-up of the Samalayuca-Sásabe gas pipeline (100% owned by the Group), as well as the acquisition of the two hydroelectric plants in Panama last year.

The main reason for this increase is higher profitability at Grupo Sanborns, which grew 59.6% due to higher traffic in stores after the pandemic, coupled with higher operating income at Grupo Condumex, which rose 45.0%, and at Carso Energy, which it went from a loss of 183 million pesos to a profit of 1,901 million pesos.

On the other hand, Carso Infraestructura y Construcción decreased 60.8%, which already considers the rehabilitation services of the collaboration agreement with the Government of Mexico City (GCDMX) and the Collective Transportation System (STC-Metro) to carry out rehabilitation works of Metro line 12.

For purposes of calculating this indicator, extraordinary items are not considered, nor are items that do not imply cash flow, such as the revaluation of investment properties. The corresponding EBITDA margin was 12.6%, compared to 11.8% a year earlier.

Finally, the Comprehensive Financing Result was an expense of 751 million pesos, which was higher than the 587 million expense of the previous year. This was due to higher net interest paid, since foreign exchange results remained constant to last year.