Grupo México reported that the sales of its Transportation Division fell 2.1% at an annual rate during the first quarter of 2021, to 593 million dollars.

More than anything, this was due to an impact due to the exchange rate, since volumes grew 2.3% and sales in pesos had a slight increase.

The operations of the Transportation Division are integrated into GMéxico Transportes (GMXT), of which Grupo México maintains 69.96 percent.

The remaining 26% of GFM is held by Union Pacific.

GMXT also owns 100% of Florida East Coast (FEC) which operates a premier 351-mile freight rail network along the east coast of Florida, from Jacksonville to Miami, in the United States. 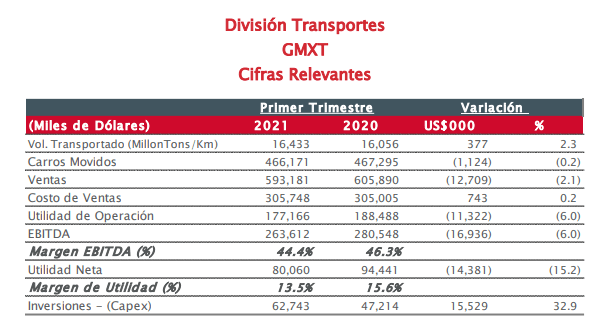 In the first quarter of 2021, the Transportation Division obtained an EBITDA of 264 million dollars, decreasing 6%, but showing a recovery of 12.8% against the fourth quarter of 2020.

In this Division, net sales were obtained for the first quarter of 593 million dollars and an EBITDA of 264 million dollars, a decrease of 2.1 and 6.0%, respectively.

Likewise, the Division had increases of 3.3% in ton-kilometers and 3.7% in cars compared to the fourth quarter of 2020 and a growth in market share and demand in the construction industry in Florida.

During the first quarter of 2021, volume grew 2.3% in ton-kilometers, mainly in the Energy, Metals and Agricultural segments, with an increase in Tons-Km of 12, 9 and 5% respectively.

The segment showed a growth in the first quarter of 11% in revenues and 12% in Tons-Km as a consequence of an increase in imports of refined products and LP gas, as well as the reactivation of exports of fuel oil.

This segment shows an accumulated variation of 6% in revenues, 0.5% in Tons-Km and 6% in cars, due to an increase in the market share in the United States and the stabilization of the national iron ore production.

The segment presents a cumulative increase of 7% in revenues, 9% in Tons-Km and 6% in cars, mainly due to the increase in traffic, both imported and domestic, of scrap metal, rebar and slab. Agricultural

The segment showed a growth in the first quarter of 1% in revenues and 5% in Tons-Km as a consequence of an increase in imports of carousel trains impacted by unfavorable variations in the exchange rate during March.