Grupo México plans to invest 71 million dollars in its highway projects in 2020.

This item is part of investments for a total of 412 million dollars that the company estimates to spend in the current year.

During 2019, Grupo México Autopistas had revenues of 43 million dollars, which represented an increase of 7.1% compared to 2018.

On the Salamanca-León Highway, the daily capacity in 2019 was 13,206 vehicles, exceeding the 2018 figure by 3.7% and representing an equivalent daily capacity per vehicle type of 20,811 units.

In Section 2 of the Silao Bypass, which began operations in September 2019, a daily capacity of 1,780 vehicles was obtained at the end of 2019.

During 2018, the highway had revenues equivalent to 40 million dollars and reached a daily equivalent capacity of 20,108 vehicles, which represented an increase of approximately 10% compared to 2017.

In 2019, the company invested 60 million dollars in its highway projects (Salamanca-León and Libramiento Silao).

The Infrastructure Division of Grupo México offers drilling services for the exploration of oil and water, energy production services, and participates in engineering activities, seeks construction of infrastructure works, specialized services of integral engineering of projects and the operation and conservation of highways. 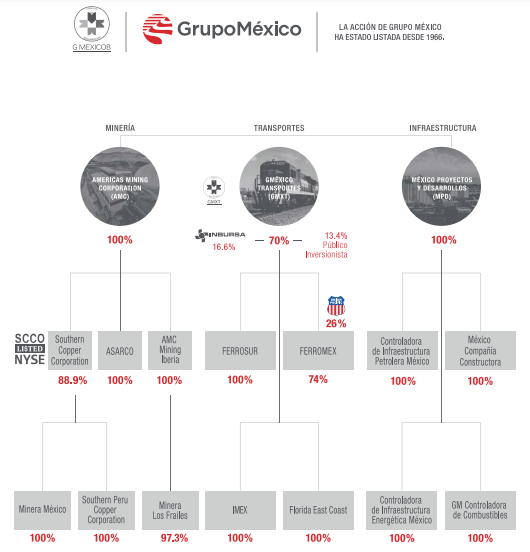