Grupo Mexico reported an increase in sales of 22.1% and an EBITDA that increased 48.5 percent.

This is due to the strength in copper prices and positive performance in mining production, said Intercam Banco, in a report issued this Wednesday.

Therefore, the company was able to counteract the weakness of its transportation and infrastructure division.

In terms of profitability, the company placed its EBITDA margin at 53.6%, a level not observed in more than 10 years.

According to Intercam Banco, this is explained because, in synchrony with the rise in the price of copper, the company has managed to control its expenses and has lowered its cash operating cost per pound of copper by just over 20%, reaffirming its position as the mining company with the lowest cash-cost in the industry worldwide.

The company’s mining sales rose 35.5% and its EBITDA climbed 76.7%, considering figures in dollars.

The mining division reported better-than-expected figures, following a good performance by Asarco in the United States, and higher production at all Southern Copper mines with the exception of the Toquepala mine (-2.9%) in Peru.

During the fourth quarter, Grupo Mexico’s copper production increased 2.4% and for all of 2020 its rise was 0.9%, presenting a resilient behavior despite the pandemic.

However, most of the increase in sales during the quarter was due to the 22% rise in the price of copper, which went from 2.68 dollars a pound to 3.27.

Currently the price of copper is located at 3.61 dollars, supported by the application of new fiscal stimuli, an environment of low interest rates, low levels of copper inventory, weakness in the dollar index and strength of the Chinese economy (the largest demand copper of the world).

It is important to note that the upward trend in metals is not exclusive to copper, since similar performances are observed in zinc, silver and gold; while lead lags behind.

The performance was negative and lower than expected, as a consequence of the fall in the revenues and volumes of the agricultural segment, which weighs 26% of GMXT’s consolidated revenues.

At the same time, weak figures were reported in the intermodal and industrial segments. 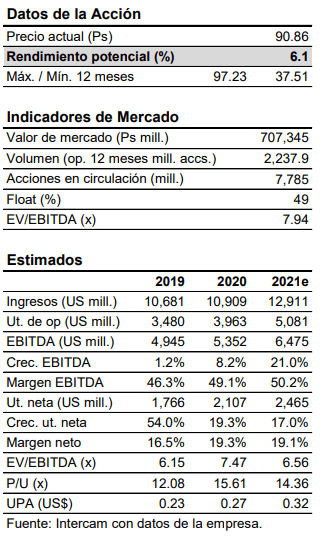 In terms of profitability, it was affected by lower freight revenue and a higher comparable base in the fourth quarter of 2019.

Despite the above, the administration estimates that it will achieve a double-digit increase in revenue in 2021, mainly due to new traffic and mix.

Grupo México’s sales in this division decreased 9.6%, while EBITDA decreased 2.8%, with figures in dollars.

The division reported slightly better figures than Intercam Banco’s expectations. This is due to a positive performance in the power generation business, following an increase in the price of the gas molecule, which lessened the negative effects caused by the pandemic in the infrastructure businesses, in the highway division, and in the construction company.

In relation to the new Fenicias wind farm, the company estimates that it will start operations at the end of the first quarter of 2021, which is in line with previous comments and will also help the division register year-on-year growth from the second quarter of 2021.