The HR Ratings Agency observed pressure on Grupo Lala’s cost of sales, with an increase of 2.3% compared to the base scenario.

This increase is the result of higher production costs in Mexico, the increase in raw material prices in Latin America and an effect of the exchange rate on the main inputs, resulting in a drop in the Gross Margin to 34.0% (from an expected of 35.2% in the base scenario and 35.0% in the stress scenario).

HR Ratings assigned a rating of HR AA- with a Stable Outlook for Grupo Lala’s Lala 20 and Lala 20-2 issues.

The rating is also based on the fact that during the last 12 months to the second quarter of 2020, the company reached the expected levels of sales (0.4% above the projected).

At the same time, HR Ratings estimates improvements at the operating level with an Adjusted EBITDA Margin of 12.0%, in Mexico, and 9.5% at the consolidated level in 2020 and 10.1% in 2021 due to lower selling and marketing expenses, derived from the change in strategy with focus on profitability, SKU rationalization (mix improvement) and price increases and a more focused business activity.

Grupo Lala S.A.B. de C.V. is a Mexican company focused on the dairy industry, and is a leader in fresh milk and UHT, as well as one of the main producers of yogurt and cheeses in Mexico. 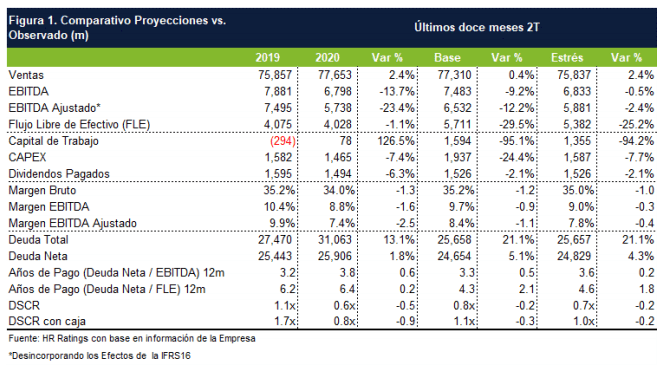 At the end of 2019, Grupo Lala has a presence in six countries, operates 31 production plants and 185 distribution centers in Mexico, the United States of North America, Central America and Brazil.

The company has more than 38,000 employees and operates its own fleet that covers more than 6,500 distribution routes for the delivery of more than 600 products corresponding to a portfolio of more than 50 brands in more than 628,000 points of sale in Mexico.

Additionally, they market a wide variety of dairy products under the LALA and Nutri brands, positioned as the third and fourth most recognized brand of consumer products in Mexico.