Grupo KUO reported revenues of Ps. 17.087 billion in the third quarter of 2022, an increase of 10% year-over-year, mainly explained by higher prices in the Consumer and Chemical businesses. 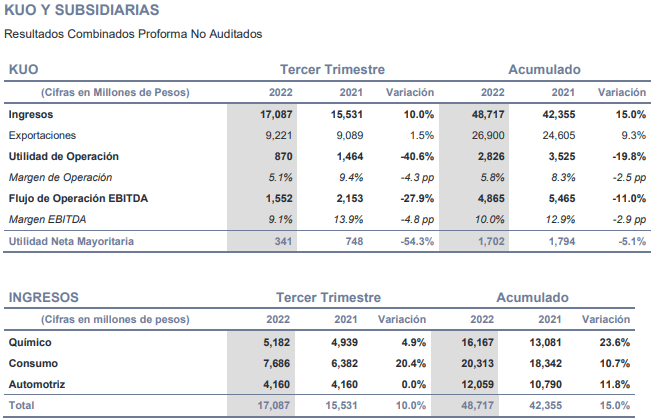 In particular, in Synthetic Rubber, there was higher demand in applications for the asphalt modifiers and adhesives segments, while Polymers registered higher prices in applications, particularly in the construction, food and consumer segments.

In the Spare Parts business, higher sales were observed in the brake, engine and powertrain lines, which offset the lower volume displaced in the Transmissions business.

The percentage of exports to total revenues during the quarter was 54%, an increase of 1.5%, driven by the Pork and Herdez Del Fuerte businesses.

During the quarter, the company recorded a decrease in Operating Income of 41% and a decrease in EBITDA of 28%, reaching Ps. 870 million and Ps. 1,552 million, respectively.

The contraction is mainly explained by the sharp increase in the prices of the main raw materials, such as corn and soybean paste in Porcícola, avocado in Herdez Del Fuerte, steel and aluminum in Automotive, together with higher distribution and transportation costs.

This was partially offset by better performance in the Polymers, Herdez Del Fuerte and Parts businesses.

KUO is a Mexican company whose main assets are located in Mexico.

In addition, KUO has significant assets in other parts of the world, such as Spain, Belgium, the United States and China.

Potential economic, political, fiscal and legislative changes in these territories could have an adverse effect on KUO’s operations.

KUO’s export sales at the end of 2021 represent 57% of Total Revenues.