Grupo Bimbo reported that it reduced its routes 7% in 2020 compared to the previous year, to 53,000 worldwide.

With 134,000 employees, the same number as in 2019, the company directly operates all routes in Mexico and most routes in Latin America.

Generally, Grupo Bimbo enters into long-term contracts with these independent distributors by virtue of which they agree to sell the Group’s products exclusively.

The terms of these contracts also specify which territories the independent distributors will cover and their compensation, based on sales performance.

According to Grupo Bimbo, there is strict control over brand management, advertising strategies, prices and the right to buy from each of the independent distributors under certain circumstances.

The company’s distribution model is adapted to each country in which it operates, for example, it is believed that the use of independent distributors in the United States reduces distribution costs and increases the flexibility to add points of sale efficiently, while maintaining the quality of services.

Grupo Bimbo’s sales force distributes products to its customers from its distribution centers according to predetermined schedules.

Currently, all routes can deliver and collect returned products from consumers at each visit.

Products can be returned by customers if unsold, and replaced with fresh products at no cost.

Likewise, the products collected are not considered fresh, although they can still be consumed, they are collected a few days before their expiration date. 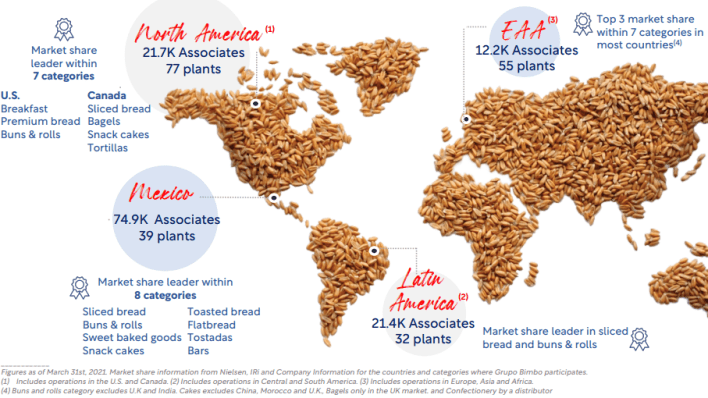 Its network allows it to take its products to more than 3 million points of sale every day to satisfy the needs of all types of consumers from supermarkets to family businesses, and for the fast food channel.