Gruma invested 43 million dollars in the first quarter of 2021, while it has maintained a growth in its external sales.

During the first quarter of the current year, the main projects of the company were:

It is also a major producer of nixtamalized corn flour and tortillas in Central America, of tortillas and other flat breads (including pitta, naan, chapati, pizza bases and piadina) in Europe, Asia and Oceania, and of corn grits in Europe and The middle east.

At the same time, tortilla sales volume remained unchanged at 216,000 metric tons due to a slow recovery in the institutional segment, which has not reached pre-pandemic levels.

Practically, the growth in sales volume in the retail channel offset the decline in the institutional channel, reflecting the trend to eat more at home, while consumers continue to become familiar with the versatility of the tortilla in both Hispanic and non-Hispanic populations in the United States.

Meanwhile, volume growth in the tortilla business for the retail channel was driven especially by super soft wheat flour tortillas and low-carbohydrate tortillas. 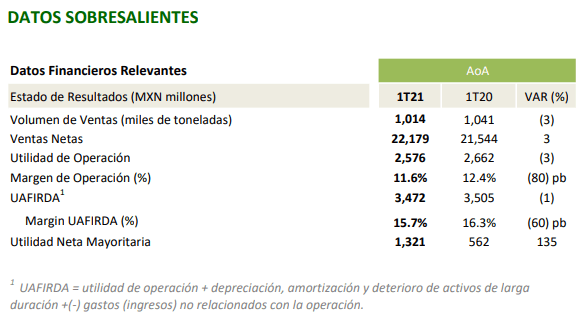 Corn flour sales volume fell 7%, to 147,000 metric tons due to the accumulation of inventories by its customers during the first quarter of 2020, due to the effect of Covid-19.

In addition, the volumes of both tortilla and corn flour were affected by the consequences of the serious weather conditions during February 2021.