Imports of grapes from Mexico registered a year-on-year fall of 23.9% from January to July 2020, to 50.3 million dollars, according to statistics from the Ministry of Economy.

Of that total, 43.7 million dollars were supplied from the United States, followed by Argentina (5 million), Chile (1 million) and China (0.5 million).

In terms of volume, imports of grapes from Mexico totaled 48,416 tons in the first seven months of the year.

According to the United States Department of Agriculture (USDA), the grape production forecast in Mexico for the 2020/2021 season is 391,168 tons, 4% less than the 2019/2020 commercial season, due to the frosts in February and March affecting a significant growing region in Sonora and insufficient sunlight during the growing season.

The most affected varieties were Perlettes and other red seedless varieties such as Sweet Celebration and Arra 29.

While field yields vary by variety and cultivation method, the national yield is forecast at 15.8 tonnes / ha.

Harvesting in Sonora begins in May and normally ends in July, while Baja California and other states harvest from June to August.

Most of the production of Zacatecas and Guanajuato is sold in local markets.

Consumption and imports of grapes

The USDA forecast for consumption in Mexico for the 2020/21 marketing year is 271,269 tons, slightly lower than the 2019/2020 marketing year due to consumers buying lower-cost fruits.

Grapes are often one of the most expensive fruits and purchases are concentrated among high-income consumers.

Consumption in the 2019/2020 marketing season was revised down by the USDA due to the effects of Covid-19 in the hotel and restaurant industry, as well as the decrease in purchasing power.

While Mexico produces sufficient volumes to meet domestic demand, consumers prefer a wider selection of varieties from the United States and Chile. 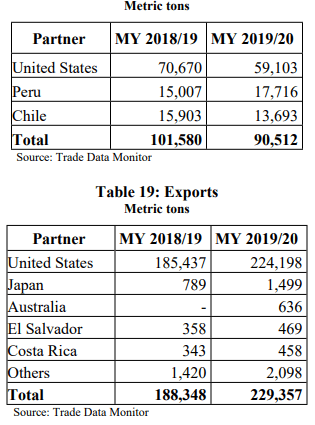 Also, while Chilean grape production is primarily counter-seasonal to US production, some Chilean grapes are also available during California’s early and late season when they compete directly in the Mexican market.

US suppliers export to Mexico from August to December and January to February, before and after the Mexican season. Chile usually exports from January to April.