Gold production in Mexico from January to September 2022 grew at a year-on-year rate of 0.8%, to 60,455.2 kilos with metallic content, Inegi reported.

While gold can be easily sold in numerous markets around the world and it is not difficult to determine its market price at any given time, reference prices are generally based on London gold market quotations. 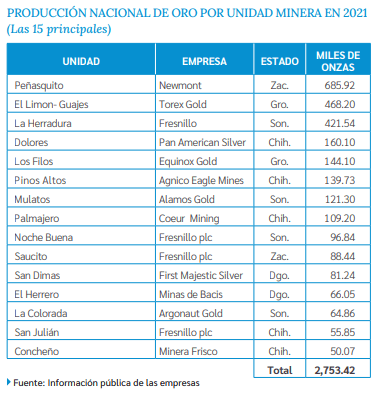 But production for the first three quarters of the current year is far from its all-time high for a similar period in Mexico: the current record is from 2015, when the country produced 92,930 kilos.

According to Barrick, gold bullion is held as an asset class for a variety of reasons, including as a store of value and safeguard against the collapse of paper assets such as stocks, bonds and other financial instruments that are traded in fiat currencies not exchangeable for gold (at a fixed exchange rate) under a “gold standard,” as a hedge against future inflation and for portfolio diversification.

Governments, central banks and other official institutions hold significant amounts of gold as a component of foreign exchange reserves.

As there are a large number of gold buyers available, Barrick, for example, does not rely on selling gold to a single customer.

According to the U.S. Department of Commerce, the market value of Mexico’s mining sector in 2021 was US$1.81 billion.

Finally, Mexico is a large consumer of mineral fuels and in 2021 imported fuels were valued at US$43 billion.

About 65% of Mexico’s total mineral fuel imports originate in the United States.