Global surface temperature has risen faster since 1970 than in any other 50-year period for at least the last 2,000 years (high confidence).

In general, the IPCC is an intergovernmental organization of the United Nations that provides the world with an objective and scientific opinion on climate change.

Before that, the next most recent warm period was about 125,000 years ago when the temperature of several centuries [0.5 ° C to 1.5 ° C relative to 1850-1900] overlaps observations from the most recent decade (medium confidence) .

Also, according to the IPCC, in 2011-2020, the annual average Arctic sea ice area reached its lowest level since at least 1850 (high confidence). 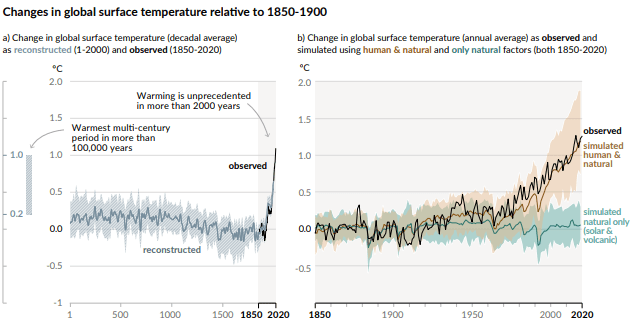 The Arctic sea ice area in late summer was smaller than at any time in at least the last 1000 years (medium confidence).

The global nature of glacier retreat, with almost all glaciers in the world retreating synchronously, since the 1950s, is unprecedented in at least the last 2000 years (medium confidence).

On the other hand, global mean sea level has risen faster since 1900 than in any previous century in at least the last 3,000 years (high confidence).

Meanwhile, the global ocean has warmed faster over the past century than since the end of the last deglacial transition (about 11,000 years ago) (medium confidence).