With this, according to a UNCTAD report, the amount represented the lowest level since 2005 and almost 20% lower than the 2009 low after the global financial crisis.

Lockdowns around the world in response to the Covid-19 pandemic slowed existing investment projects and the prospects of a recession led multinational companies (MNEs) to reassess new projects.

Likewise, the fall in FDI was significantly more pronounced than the fall in gross domestic product (GDP) and trade.

On the one hand, Foreign Direct Investment plummeted in developed and transition economies, dropping 58% in both.

On the other hand, FDI decreased 8% in developing economies, mainly due to resilient flows in Asia (up 4%).

As a result, developing economies accounted for two-thirds of global FDI, up from just under half in 2019.

Both the steep decline in developed economies and Asia’s relatively strong performance were largely influenced by large fluctuations in a small number of countries.

FDI in¬ows, global and by group of economies, 2007–2020 (Billions of dollars and per cent 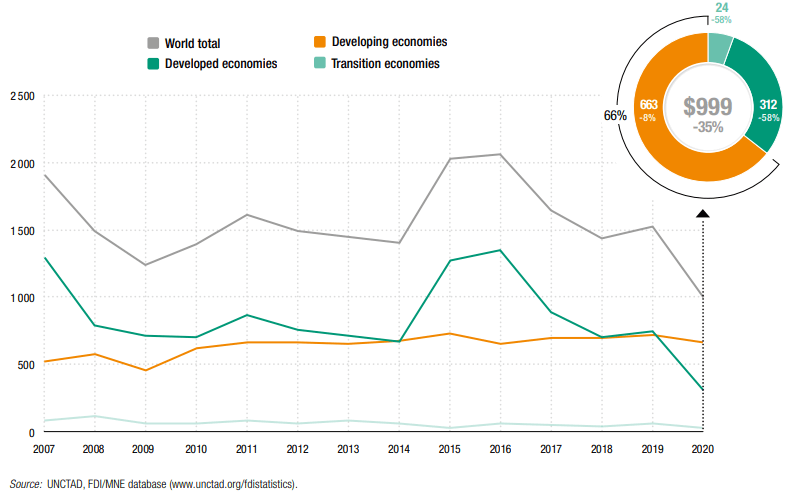 Of the global drop of about $ 500 billion, nearly a third was in the Netherlands and was triggered by the liquidation of several major holding companies, corporate reconfigurations, and intra-company financial flows.

More than anything, the rebound in Asia was due to increased FDI flows to Hong Kong, China ($ 46 billion more than 2019 low levels), mainly reflecting financial transactions by Chinese multinational companies.

If the effects of conduit flows, one-time transactions, and intra-firm financial flows are excluded, the global decline was slightly more moderate (around 25%) and uniform (with a 6% decline in flows to developing countries from Asia).

International project finance announcements and agreements were in stark contrast to FDI patterns, with declines much more pronounced in developing economies than in developed ones.

New announcements in developing countries decreased by 44% in value and international project finance agreements by 53%, compared to 16% and 28% in developed countries.

These types of investment are crucial for the development of productive capacity and infrastructure and for the prospects for a sustainable recovery.