In the first quarter of 2022, global FDI flows reached their highest quarterly level in five years, the World Trade Organization (WTO) reported, based on data from UNCTAD and the OECD.

At a year-on-year rate, global FDI flows increased 15% compared to the first quarter of 2021.

However, the WTO stated that the outlook remains uncertain given the current geopolitical context.

Earnings remained elevated in Q1 2022, contributing to the upward trend in FDI inflows. 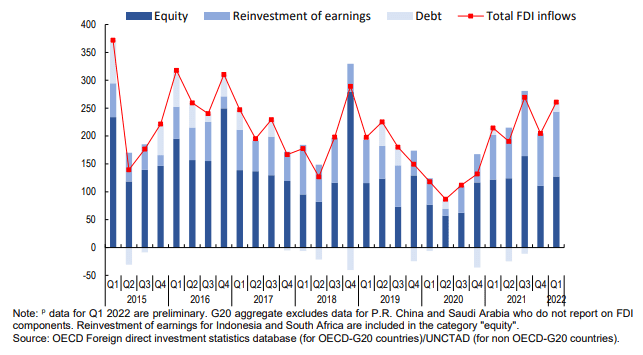 Fewer of these profits were distributed to foreign parent companies, resulting in higher levels of reinvested profits.

Capital flows also contributed to the increase, although this was unevenly distributed across the various Group of 20 (G20) economies.

Much of this increase was associated with Australia, which experienced record inflows and outflows of FDI, reflecting intensified M&A activity in the first quarter of 2022. 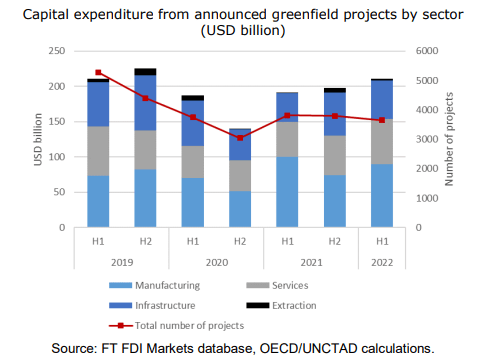 Although new investment activity was generally strong in 2021, the outlook for 2022 remains uncertain due to the war in Ukraine.

The latest data on greenfield investment projects announced by the Financial Times fDI Markets database shows signs of recovery from the Covid-19 pandemic for some economies.

At the sectoral level, the largest increase in capital expenditures was observed in manufacturing and services (by 21% and 14%, respectively).

However, in H1 2022, the value of new investment projects announced in infrastructure declined 10%, and in extractive industries (mainly coal, oil and gas) fell 71% compared to the previous half-year.