Global demand for lithium will rise from 305,000 tonnes of lithium carbonate equivalent (LCE) in 2020 to 452,000 tonnes in 2021, according to projections released by the Australian government.

In general, lithium is a key component in products and processes used in a variety of applications and industries, including lithium batteries used in consumer electronics and electric vehicles, high-performance greases, thermoplastic elastomers for car tires, rubber soles. rubber and plastic bottles, catalysts for chemical reactions, organic synthesis processes in the areas of steroid and vitamin chemistry, various life science applications, as well as intermediates in the pharmaceutical industry, among other applications. 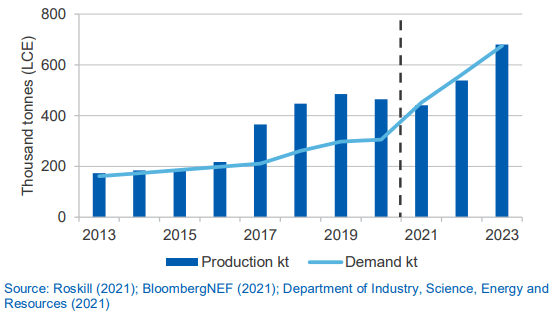 The sharp increase in demand in 2021 is based on increased acceptance of electric vehicles, driven by prices, model choice and government action.

Meanwhile, during the four months to April 2021, China‘s lithium hydroxide exports decreased 8% compared to the end of 2020, but increased 20% in April, month-over-month, reflecting normal trade.

The global lithium market is made up of producers located mainly in America, Asia and Australia.