Global coarse grain production for the 2021/22 season increased by 12.5 million tonnes in September 2021, the USDA estimated.

More than anything, the result is influenced by an estimate that corn production will increase by 11.7 million tons, to 1,197.7 million.

According to USDA projections, foreign production of coarse grains will be up 5.1 million tonnes this month. 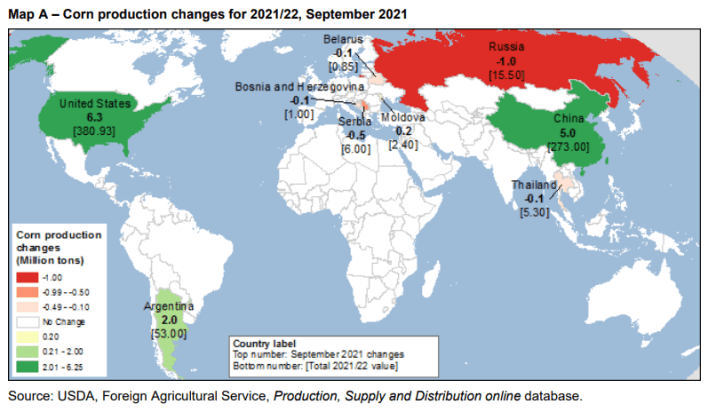 Aside from the United States, most of the production increase comes from Chinese and Argentine corn, along with Australian and Ukrainian barley, with reductions partially offset for Canadian and Russian barley, as well as the lowest projected Serbian corn.

For the 2020/21 projection, coarse grain production increased by 1.7 million tonnes, mainly due to higher Argentine corn production, as well as higher Indian corn and millet totals that are partially offset by production reductions in Brazil and Serbia.

The largest expected increase in foreign production is that of corn from China, with an increase of 5 million tons, to 273 million.

Rainfall and weather conditions in the main corn area of ​​the United States, Northeast China, and even the North China Plain (Inner Mongolia, Heilongjiang Western Border, and Jilin regions, among others), improved dramatically in August, during the critical period of the reproductive stage.

Additionally, according to the USDA, the near-ideal weather pushed expected corn yields to a new record, nearly 2% to 6.5 tons per hectare.

Although the harvested area of ​​corn has not changed this month, it is 0.7 million hectares more year-over-year, as prices and yields of American corn are on the rise and farmers are eager to profit from policy-driven prices and the demand.

Argentina‘s corn production is projected higher in the increased area for two consecutive years, 2020/21 and 2021/22, and rises 1.5 and 2 million tonnes this month, to 50 and 53 million, respectively. The three elements of agronomy, climate and economy have combined to drive corn plantations.