The German economy is the fourth largest in the world and accounted for a quarter (24.2%) of the European Union‘s GDP in 2020.

Conversely, from January to August, German exports were 892.7 billion euros, an increase of 15.9% at the annual rate.

Overall, according to Deutsche Bank, the eurozone economies have remarkably recovered by the end of the second quarter of 2021.

While country-specific Covid-19 policies resulted in a gradual divergence in each country’s economic recovery in the first half of the year, the European Central Bank continued its support and fiscal policy also remained expansive. 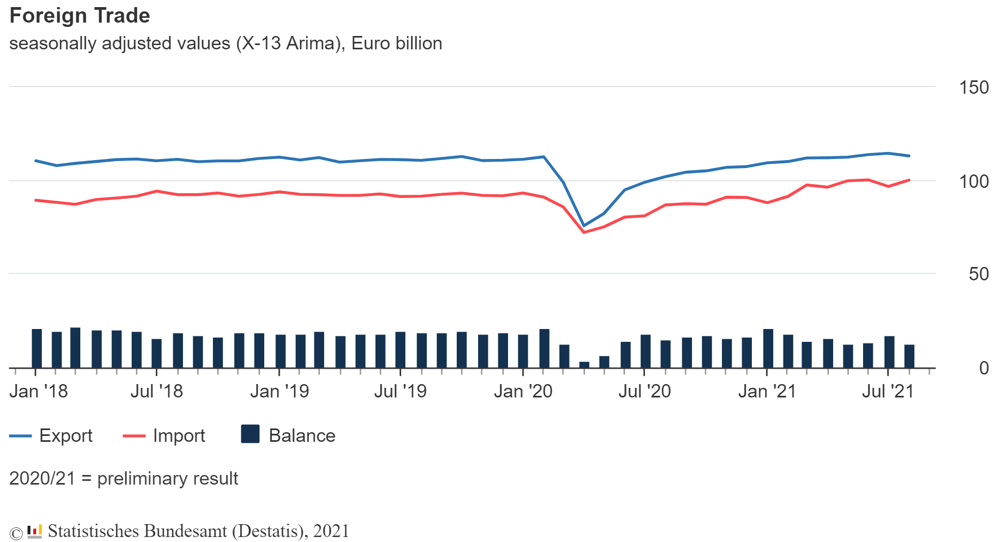 In particular and in the first half of 2021, the German economy was characterized by being divided in its development.

The economy reopened again towards the middle of the year and private demand gained momentum. During the first half of 2021, the economy continued to rely on fiscal measures such as “Kurzarbeit”

On the other hand, in September 2021, Germany’s exports to countries outside the European Union (third countries) fell 0.4% on a calendar and seasonally adjusted basis compared to August 2021.

According to provisional data, the Federal Statistical Office (Destatis) also reports that, after calendar and seasonal adjustment, exports to third countries were 7.1% higher than in February 2020, the month before the imposition of restrictions due to the coronavirus pandemic in Germany.

Germany is the third largest exporter in the world, and exports account for almost half of its economic output.