German imports grew 15.3% year-on-year during the first half of 2021, reported the Federal Statistical Office (Destatis).

In this way, these purchases reached 576,400 million euros.

Activity in the euro zone likely strengthened in June, fueled by the earlier relaxation of mobility restrictions and an accelerated launch of the vaccine: almost 55% of the European Union population had received at least one dose by mid-July. .

With this, the surplus in the German trade balance, of products and services, totaled 96.6 billion euros in the first half of 2021, higher than the 77 billion registered in the same period of the previous year. 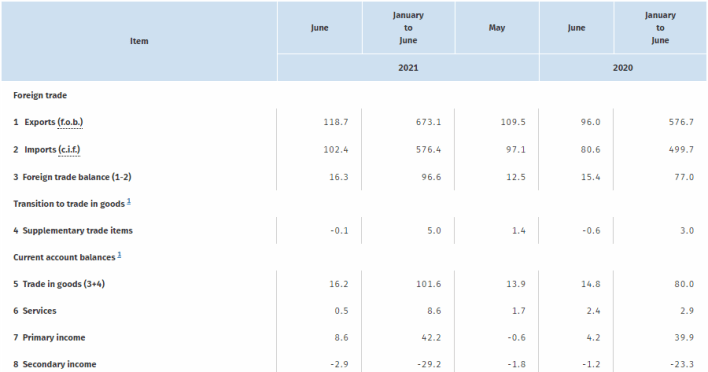 Specifically for the month of June of the current year, German imports totaled 102.4 billion euros.

That amount was 0.6% higher compared to the immediately previous month, with figures adjusted for seasonality.

That same amount also represented an increase of 27% compared to the same month in 2020.

Trade with other powers

Likewise, in June 2021, imports to Germany from the People’s Republic of China totaled 10.9 billion euros (+ 11.1% over the same month of the previous year).