Food and minerals dominate Georgia‘s imports, according to a report by the World Trade Organization (WTO).

Over the past decade, Georgia’s economic growth has been largely positive.

In general, the country has demonstrated its commitment to opening markets and to greater integration in global and regional markets, as evidenced by its participation in the WTO and, more recently, the commitments made under the Agreement on the Wide and Deep Scope Free Trade Zone (ZLCAP) signed with the European Union.

For their part, imports also grew, but at a much slower rate (10 percent).

However, a significant deficit in merchandise trade continued to be recorded in 2020, amounting to $ 4.7 billion, even though it fell slightly compared to 2015, when it reached $ 5.1 billion.

According to the WTO profile, Georgia continued to rely heavily on imported manufactures, while exports increasingly consisted of primary products, ie food and minerals. 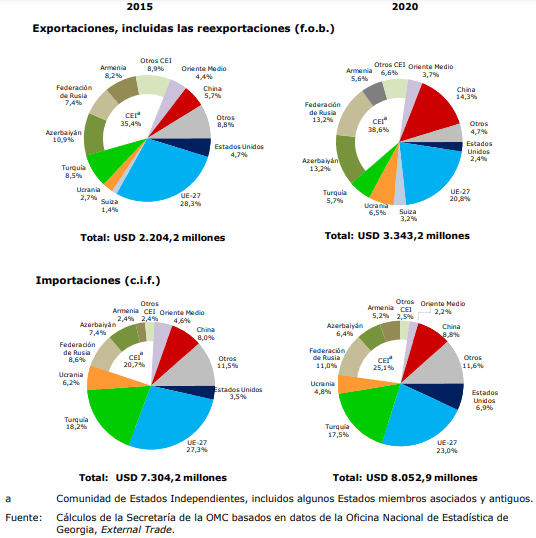 This trend intensified throughout the period, hence the shift towards exports of lower value-added products.

Although the IMF and the World Bank have noted that exports have maintained considerable resilience during the pandemic, they remain highly under-processed products.

Due to its geographic location and its transportation connections, Georgia is an important transit corridor, particularly for several of its landlocked neighbors.

Consequently, merchandise trade figures appear amplified due to the significant amounts of re-exports, which increased during the period, albeit with significant annual fluctuations, representing between 31 and 63% of national exports in any given year.

There were some changes in the product composition of exports and destination countries.

The export of mining or mineral products increased significantly during the period under review, from 21% to 27% of merchandise exports.

This is mainly attributed to the significant increase in exports of copper ore and its concentrates.

Manufacturing exports continued to be relegated to second place by exports of primary products (food and minerals) during the period.

In particular, exports of chemicals and iron and steel declined, probably due to lower external demand during the pandemic.