General Motors (GM) registered a 9.5% year-on-year drop in automotive exports in Mexico from January to August 2021, Inegi reported on Monday.

With this, the company’s automotive exports fell to 373,871 light vehicles.

In general, the automotive industry and General Motors are currently experiencing a global semiconductor supply shortage.

The supply shortage has impacted and continues to affect multiple suppliers that incorporate semiconductors in the parts they supply to GM. 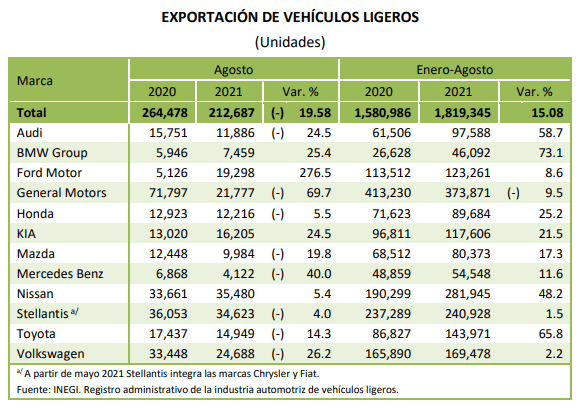 General Motors expects the semiconductor supply shortage to continue to impact its business for the foreseeable future.

At the same time, the company continues to prioritize its most popular and in-demand vehicles, including its full-size trucks, full-size SUVs, and electric vehicles.

In fact, General Motors was the only company that had a year-on-year drop in its foreign sales of light vehicles from Mexico in the first eight months of the year.

General Motors does not expect the semiconductor shortage to affect its growth and its electric vehicle initiatives.

In June 2021, the company announced plans to increase its investment in electric and autonomous vehicles from $ 27 billion to $ 35 billion, through 2025, to accelerate the assembly capacity of batteries and electric vehicles.

The company will also continue to monitor the impact of the Covid-19 pandemic and government actions and measures taken to prevent its spread and the potential to affect its operations.

Industry sales in North America were 10.1 million units in the six months ended June 30, 2021, representing an increase of 29.5% compared to the corresponding period in 2020.

In particular, US industry sales were 8.5 million units in the first half of the year, an advance of 29.5% compared to the corresponding period in 2020.