Games, including casinos, is the main economic activity in Macau, China, although its contribution to GDP decreased from 62.9% in 2012 to 50.5% in 2018, a report by the World Trade Organization (WTO) indicated.

The authorities have tried to diversify the economy into different sectors, as the high level of dependency on this sector has made the economy vulnerable to external shocks.

In general, the Macau economy is characterized by a predominance of services, representing more than 95% of GDP and around 90% of total employment in the period 2013-2020.

The Plan establishes the objective that the operators of this industry diversify their activities towards others related to tourism and increase their income not related to games.

In order to promote cross-sector diversification, various service sectors have been promoted, such as the meeting, incentive, conference and exhibition industry (MICE), traditional Chinese medicine, cultural and creative industries, wholesale and retail trade, activities real estate and business, and the activities of the financial sector.

The games sector continues to be the main engine of the tourism industry and the economy in general; in 2018 it represented around 50.5% of the total gross value added (GVA).

This downward trend was due to various causes, mainly the global economic slowdown and the devaluation of the Chinese renminbi (against the US dollar).

During the 2014-2016 period, the contraction of the gaming sector caused a drop in GDP.

However, despite adverse economic circumstances, the gaming industry as a whole experienced a strong recovery in 2017, reaching the level of 2012 again, although it contracted again in 2019. 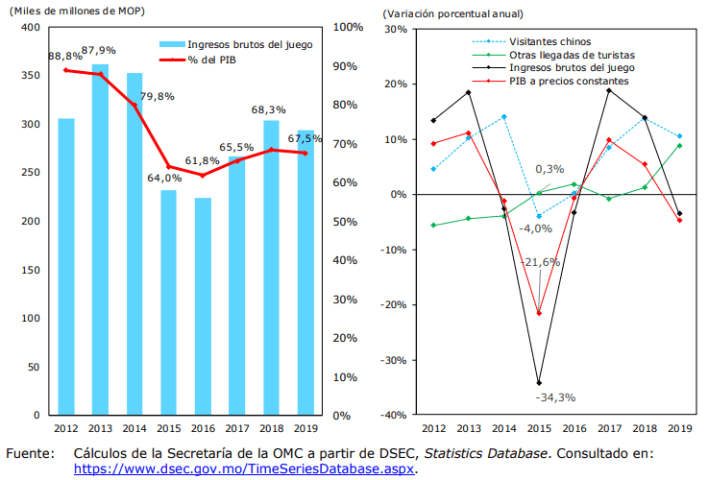 Gambling is a legal activity in Macau. The sector is regulated and licenses have been granted to three concessionaires and three sub-concessionaires, each of which is authorized to operate physical casinos as an independent legal entity.

In 2018, the three dealers and the three sub-dealers operated a total of 41 casinos.

In recent years, the extension requests submitted by Sociedade de Jogos de Macau (SJM) and MGM Grand Paradise (MGM) were approved, and their concessions and sub-concessions, respectively, were extended until June 26, 2022.