The backlog of G20 import restrictions in force has grown steadily since 2009, both in value terms and as a percentage of world imports.

This specific jump is largely explained by the measures introduced on steel and aluminum, and by the various tariff increases introduced in the context of bilateral trade tensions. 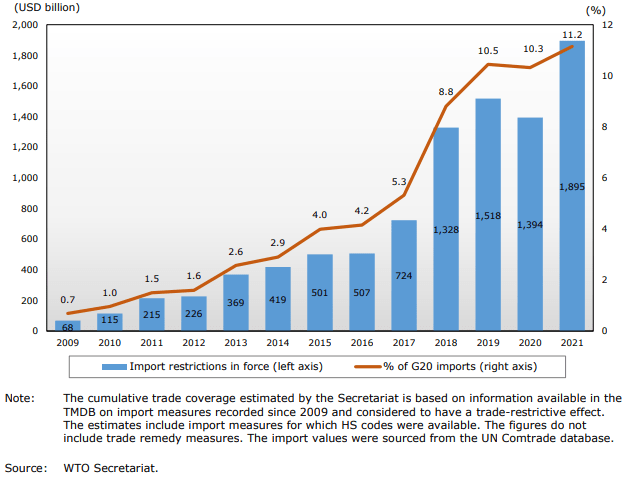 The decline was also reflected in total G20 imports and in the value of G20 import restrictions in force.

World trade returned to growth in 2021, due to higher export and import prices as inflation became a global phenomenon.

The WTO disseminated these trends in its Trade Monitoring Report on G20 trade measures.

For this Report, no information was received from G20 economies on the ending of import restrictions.

Estimating the rollback of import restrictive measures, and eventually total stocks, is made complex by the fact that many temporary measures remain in place beyond the expected termination date.

In addition, the WTO Secretariat does not always receive accurate information on changes in notified measures.

Consequently, the figures presented below are estimates based on information recorded in the temporary measures database since 2009.