Ferromex carried out a successful issuance of stock certificates at a fixed rate of seven years and another at a variable rate of four years, for a total of 5,000 million pesos.

“This debt placement confirms the confidence that the company has in the recovery of the Mexican economy after the effects of the pandemic and in the high potential of the railway sector,” the company said in a statement.

Likewise, he added, it demonstrates the certainty of investors that Ferromex will maintain its solid operating and financial performance.

Due to its condition as the largest railway company in Mexico and its very low risk of default for the payment of its obligations, the debt securities issued by the subsidiary of Grupo México Transportes received the “AAA” notes, the highest in the national scale. , by the rating agencies, in addition to a demand of 3.11 times the amount requested.

Ferromex and its parent company

Grupo México reported that the sales of its Transportation Division fell 2.1% at an annual rate during the first quarter of 2021, to 593 million dollars.

More than anything, this was due to an impact due to the exchange rate, since volumes grew 2.3% and sales in pesos had a slight increase. 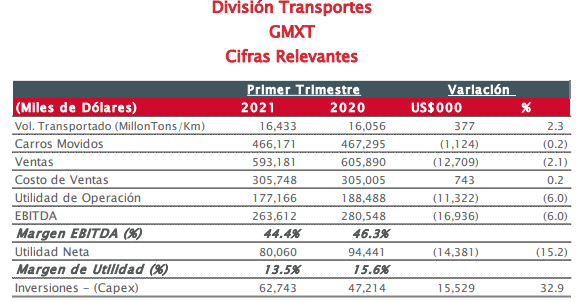 The operations of the Transportation Division are integrated into GMéxico Transportes (GMXT), of which Grupo México maintains 69.96 percent.

The remaining 26% of GFM is held by Union Pacific.

With the resources collected, the company indicated that it will maintain its aggressive investment program in the country and will settle bank and securities debt maturing on May 20 of this year and October 28, 2022.

Grupo México Transportes remains certain that the reactivation of the various industrial sectors will contribute to a sustained growth in its sales, while its market share will continue to expand as a result of its operating efficiency and its new investments.