The companies Ferrocarril Mexicano (Ferromex) and Kansas City Southern de México (KCSM) registered drops of 1.2 and 3.1%, respectively, in the movement of rail freight in Mexico in the first half of 2020, at annual rates.

Rail transport moved 58 million 962,000 tons in the first six months of the year in the country, a year-on-year decrease of 4.3 percent.

In particular, Ferromex registered 28 million 891,000 tons, a decrease of 1.2%, comparing the same periods.

WTO June statistics showed a 14% drop in the volume of world merchandise trade between the first and second quarters of this year.

This estimate, together with the new reading of the Merchandise Trade Barometer, suggests that world trade in 2020 is evolving in line with the less pessimistic of the two scenarios outlined in the WTO’s April forecast, which projected that the volume of Merchandise trade this year would contract by 13% compared to 2019.

“However, as WTO economists warned in June, the strong economic cost of the Covid-19 pandemic suggests that projections for a strong V-shaped trade rebound in 2021 may be overly optimistic.

“Given that uncertainty remains high, in terms of economic and trade policy, as well as how the medical crisis will play out, an L-shaped recovery is a real prospect. This would leave world trade well below its pre-pandemic trajectory, “concluded the WTO.

Mexico registered a record in its trade surplus of merchandise in June, of 5.547 million dollars, the highest since January 1993, the last data in which the Bank of Mexico has statistics online. 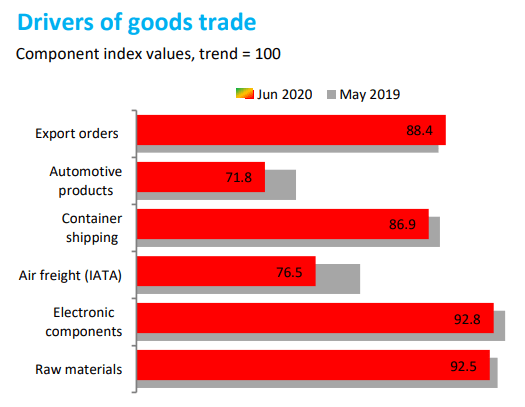