The Felipe Ángeles International Airport had an advance of 61.4% as of June 30, 2021, the government of Mexico reported.

First of all, on March 11, 2019, the President of Mexico, Andrés Manuel López Obrador, announced that the saturation of the New Mexico City International Airport (NAICM) will be addressed through the construction of two additional runways at the Air Base of Santa Lucía located in Zumpango, State of Mexico.

The construction of the Santa Lucía General Felipe Ángeles airport began on October 17, 2019. 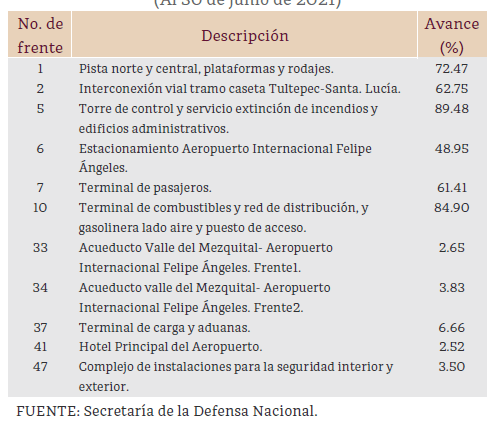 Likewise, the first stage of construction is expected to be completed by October 17, 2021.

From the government perspective, the Felipe Angeles International Airport is designed to meet the needs of passengers and cargo in the Valley of Mexico and is a strategic work for the economic reactivation of the country.

Despite its scale and complexity, construction is progressing and proceeding according to the overall schedule and without setbacks.

According to the Presidency of the Republic, this project is technically, economically, legally and environmentally viable, it is developed under the responsibility of the Secretariat of National Defense and in close inter-institutional coordination with the support of national and foreign experts.

In its initial stage, it will have three runways to serve 19 million 461,806 passengers and in 30 years it will serve a demand of 84 million 886,826 passengers with four runways.

This international infrastructure work is organized into 48 active work fronts and four in recess.

The main advances obtained between September 2020 and June 2021 are presented below: