Foreign Direct Investment (FDI) flows will recover “at the earliest” until 2022, the United Nations Conference on Trade and Development (UNCTAD) reported on Thursday.

The Covid-19 pandemic has had an immediate and negative impact on FDI in 2020.

The outlook remains dire, with further deterioration projected in 2021.

Exceptional global circumstances as a result of the pandemic led to a delay in the implementation of investment projects and the postponement of new projects, as well as the depletion of the profits of foreign affiliates, of which a significant part is normally reinvested in the recipient countries.

As a result, global Foreign Direct Investment flows are projected to decline by as much as 40% in 2020, from their 2019 value of about $ 1.6 trillion.

This would bring FDI to less than 1 trillion for the first time since 2005.

UNCTAD projects that FDI will decline further in 2021 and “will only start to recover in 2022 at the earliest.”

After the Covid-19 outbreak, the lockdown instantly affected productive investment. However, some investment expenditures continued (for example, project operating fixed costs), but other disbursements were blocked.

At the same time, announcements of totally new projects were shelved. 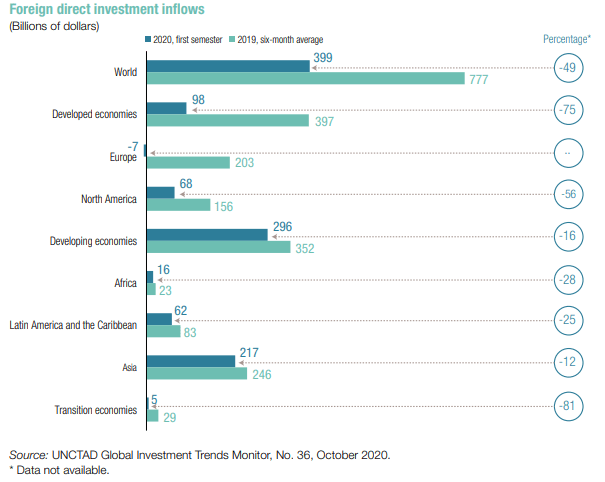 Similarly, many mergers and acquisitions were temporarily suspended or canceled. Regulators in the United States and Europe have reported delays in the approval processes for some planned mega-mergers.