External demand is driving moderate growth in the Mexican economy, with an 8.2% year-on-year growth in foreign product shipments in September.

Mexico is the 15th largest economy in the world and has generally enjoyed low but stable economic growth since the 1990s. 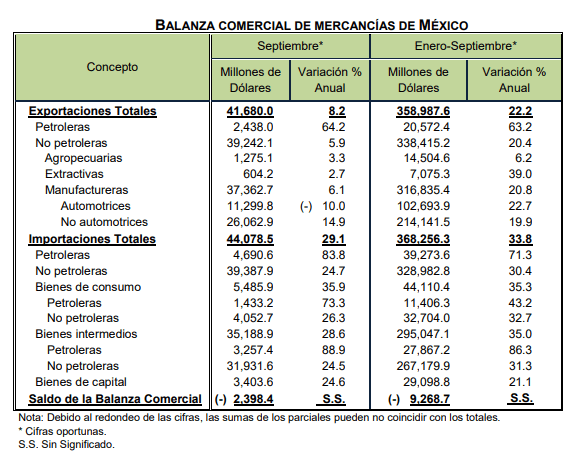 Despite the contraction linked to Covid-19 in 2020, Mexico’s economy is expected to recover in 2021 and achieve moderate growth driven by external demand.

Mexico’s GDP decreased 8.3% in real terms during 2020, reflecting the negative economic effects of the Covid-19 pandemic and months of restrictions on production and mobility.

Now the International Monetary Fund (IMF) projects that the Mexican economy will grow 6.2% in 2021.

Consequently, Mexico’s GDP would be driven by external demand.

Mexico is the largest Spanish-speaking country in the world, with an economy of 1.1 trillion dollars, the second largest in Latin America.

Timely foreign trade information for September 2021 indicates that a trade deficit of $ 2.398 billion was recorded.

Thus, this balance is compared with the deficit of 3.902 million dollars reported in August.