Exports of tequila and mezcal from Mexico grew at an annual rate of 39.3% from January to September 2021, to 2.384 million dollars, according to data from the Ministry of the Economy.

In particular, the international recognition of the denomination of origin of Mexican tequila gives a comparative advantage to those who participate in the entire production chain.

Already, tequila and mezcal exports had grown 18.2% in annual terms in the first nine months of 2020. 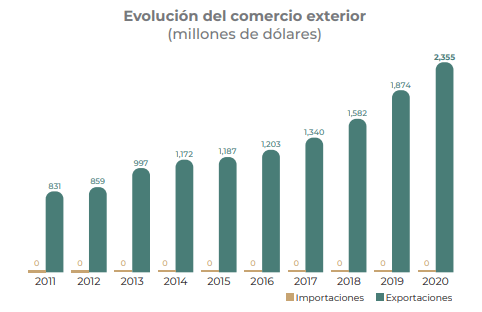 Throughout 2020, Mexico exported 308.6 million liters of tequila, with this eight out of every 10 liters produced are consumed in other nations.

Although this national drink has a presence in just over 101 countries, around 90% of the exports made during 2020 were destined for the US market, which acquired 277.8 million liters.

The agave, a plant from which tequila is obtained, is perennial and from arid zones, shrub-like, distinguished by its long, narrow and rigid blue stalks, which are the stems of the leaves.

In the center of the pineapple the natural juice accumulates, which has high contents of fructose and other vitamin properties, as well as fat particles that give it its distinctive taste and smell.

It is shaped like a pineapple, from where its leaves come out, which sometimes end in a sharp point. The pineapple or head of the agave is the usable part. To obtain tequila, six processes are carried out: cutting or jima, cooking of the “piña”, crushing, fermentation, distillation and aging.

According to statistics from the Ministry of Agriculture, the average production of the last 5 years was 1% lower than in 2020 (one million 519 thousand tons), despite the fact that in this same period the sown area increased 19.7 percent.

The crop takes an average of seven to eight years to start producing and to carry out the process known as jima.

Likewise, tequila has the property of dissolving fats that enter the body, which is why it favors the reduction of bad cholesterol.