Exports of services would be reduced by around 24% in 2020, as they were greatly affected by the paralysis of services associated with inbound tourism, ECLAC projected.

In general, market access is the main motivation for investment in services, including trade, financial and insurance services, transport and logistics, construction, electricity, gas and water supply, information and communication services, hotels and restaurants, and the real estate sector.

In 2019, exports of services represented more than 45% of total service revenue in the region.

As a result, in the first eight months of the year, tourist arrivals showed a drop in relation to the same period of the previous year, both in the Caribbean (-64%), as well as in Central America (-66%) and South America (-63 percent).

On the other hand, the fall in the volume of merchandise trade at the world level also affected the exports of services associated with this activity by countries of the region.

For example, according to the figures available up to the first semester, in the case of Panama, the great drop in international trade was already reflected in a decrease of 18% in Panamanian exports of transportation services, which include those linked to the Canal de Panama.

In 2019, income from tourism services represented approximately 33% of total exports of services from South America, 50% from Central America and Mexico, and 75% from the Caribbean. 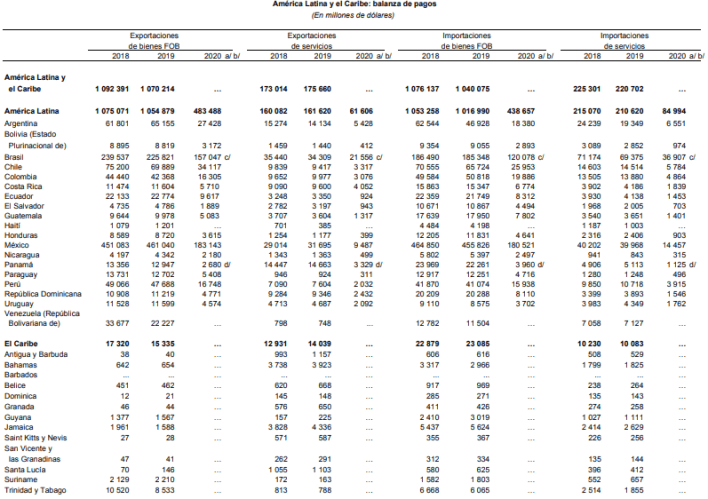 Regarding imports of services, the worsening of the regional economic activity has contributed to their contraction of around 16% and to the fact that the fall is generalized in all categories (transport, travel and other services).

With the data for the first half of 2020, travel exports are the item most affected by mobility restrictions, followed by transport, a sector that has been dragged down by the fall in imports of goods, as an effect of a lower regional activity.

The item that presents the least contraction so far is the import of other services.

A recovery is expected during the second semester thanks to the growing need for financial, IT, telecommunications services (to mitigate the effects of the pandemic) and infrastructure construction (due to the resumption of extractive industries and public investment).

Exports of services and goods, unlike the rest of the expenditure components that have a similar behavior by subregion, show a dissimilar rate of decline.

In Mexico and Central America, its negative contribution to GDP growth is six times that of South America.

This is due, in part, to the pronounced drop in exports of tourism-related services, as well as to a greater exposure of this subregion to the decrease in international trade flows of goods as a consequence of the low dynamism of the world economy1.

On the other hand, the recovery in the prices of certain basic products has contributed to reducing the negative impact on food and metal exports from South American countries.

Imports, as a result of the large contraction in domestic demand, contribute positively to GDP growth due to its fall.

In this way, net external demand would continue to represent a positive contribution to the annual variation of GDP, as it has done since 2019.